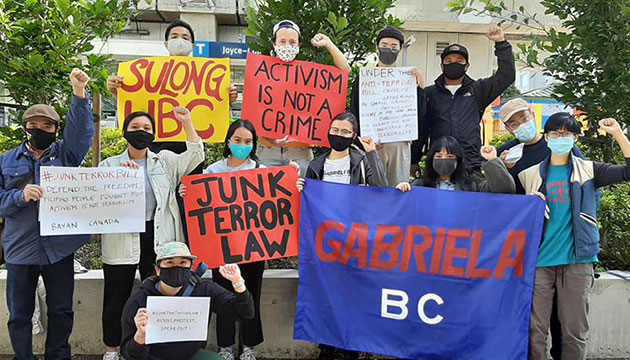 July 16, 2020 - On July 18, the new Anti Terrorism Law (ATL) will come into effect. With President Duterte certifying the congressional bill as urgent, it was passed into law at record speed purportedly to protect the country against terrorists. It forms a national policy designed to combat terrorism. It provides authority to use forceful means, including a system of surveillance, to deal with all forms of terrorism both internal and foreign.  It funds law enforcement agencies to pursue the new law’s mandates.  It protects law enforcers from retribution and punishment for any miscalculation or misapplication or abuse of the law. It gives the President sweeping powers.

The ATL calls for the creation of an Anti-Terrorism Council to be headed by an appointee of the President, a member of his cabinet, and composed of Council members who most likely will have to be acceptable to him.  It is this appointive body that will be the implementing arm of the ATL, and that has the authority to order the police to arrest without judicial warrant anyone who it suspects or determines to be a terrorist or has committed acts in support of terrorism, and to detain such person for 24 days without charge.

Without prematurely passing judgement on the Implementing Rules and Regulations that have yet to be drawn up by the Council, it is fair to say that the ATL’s lack of adequate check and balance from the judiciary or from Congress, this new ATL is an existential threat to democracy. Democracy in the PHL is in real danger of becoming a mere dictionary word, an embellishment with no practical value.

There are a handful of issues that cause concern, issues that are now subjects of petitions filed before the Supreme Court.  The most serious issue is that the definition of terrorism in the ATL is so vague and so broad that any act that contradicts or angers the president or the Council could possibly and arbitrarily be deemed an act of terrorism.  The law could then provide cover for attempts to dictatorial rule.  Other than Duterte and his minions in his administration, no one will deny that the ATL can be and will most likely be abused to curtail any and all forms of dissent. Peaceful protests could be acts of terrorism. Spoken and written objections could be acts of terrorism. Legitimate protesters, dissenters and opinion makers could be subject to arrest.  Everyone, no exception, is potentially subject to arrest without judicial warrant and can be jailed for 24 days without charge.  Under the ATL, the President may exercise his executive powers through police force.  The president and Council have near-absolute powers no different than those in totalitarian states.

The judiciary is rendered inutile as a purveyor of justice and as a balance against executive abuse. The country will effectively be a police state, a totalitarian regime.  Unless the Supreme Court rules that the ATL is unconstitutional as is now petitioned by several quarters, or unless a new Congress passes another law repealing it, this new Anti-Terrorism Law will permanently remain as the rationale for a police state.

Yes.  Every freedom loving Filipino should be concerned.

Joe Zagala is an Ontario resident who has been actively participating in Greater Toronto’s Filipino community. He is a past president of the University of the Philippines Alumni Association (Toronto), former Vice President of Kalayaan Cultural Community Centre, a former (and only Asian) director of The Riverwood Conservancy, and one of the original organizers and a past president of the Philippine Chamber of Commerce Toronto.  Joe is a holder of BS Chemical Engineering and MBA degrees from UP.  He held high positions within large corporations in Canada, including Vice President for Global Business at CipherSoft Inc.  He is Managing Director of Lily Framarc Management Consultants based in Mississauga Ontario.

COVID-19 Pandemic: College Life in the Age of COVID - Challenges and Solutions