The national winner of Royal Bank of Canada’s annual painting competition in 2015 believes that artists from different communities can learn much from each other.

Patrick Cruz, a graduate student at the University of Guelph, hopes to open up a channel for artists to share various perspectives when he puts together his next Kamias Triennale project.

The tri-annual arts event is named after Kamias, a district in Quezon City, a major city in Metro Manila, where his father’s old house is located.

“For its second iteration in 2017, I plan to invite Canadian, Filipino and other international artists to participate within the discourse of contemporary art in Quezon City,” Cruz said. “One of the primary goals of the event is to open up a dialogue between Filipino and Canadian artists and eventually establish a link that can further the conversation of disparate artistic communities.”

Cruz holds a degree in arts from the Emily Carr University of Art and Design. He also attended the College of Fine Arts in the University of the Philippines before he and his family moved to Canada in 2005.

“I was excited for the potential collaborations that can occur and the diverse knowledge that can be exchanged from each community. Filipino, Canadian and other foreign artists all have different concerns with their art practices and it is this difference that I am interested to foster. I think we can learn a lot from each other’s perspectives,” he said about his next Kamias Triennale.

In November 2015, RBC and the Canadian Art Foundation announced that Cruz was chosen as the winner of the 17th Annual RBC Canadian Painting Competition for his acrylic on canvass work Time allergy.

The painting competition is part of the RBC Emerging Artists Project, which focuses on up-and-coming artists to help them gain national recognition.

Cruz related that the inspiration for his Kamias Triennale came when he visited the Philippines in 2012 after seven years of living in Canada.

“I reconnected with my old artist friends and saw the amazing development of contemporary art practices in the Philippines,” he said. “I was inspired after experiencing the energy and witnessing the art community in Manila. I felt a strong urge to start a project where I grew up and this prompted me to travel back again. I went for a second visit in 2014 and started to put basic elements for a gallery setting, such as lights and walls within this old sweatshop to create a suitable place to show art.”

Cruz is completing his master’s degree in fine arts at the University of Guelph. “My current research stems from my personal experience migrating with my family to Canada,” the artist said. “I am interested in the effects of displacement, acculturation, hybridity and transnationalism on migrant culture.” 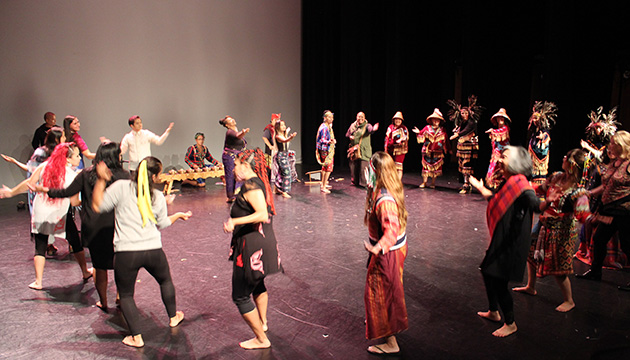