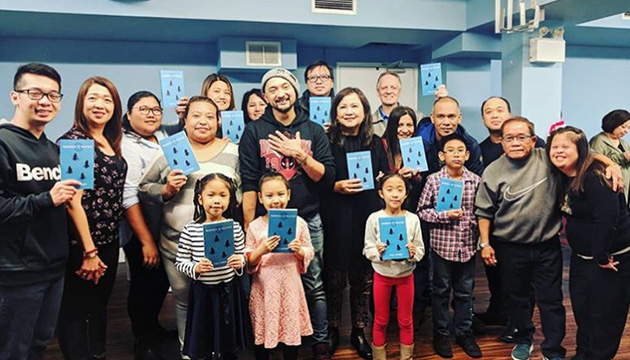 Toronto-born Yves Lamson describes himself as a writer interested in preserving “intangible histories”. This probably explains his keenness in weaving magical tales, drawing inspiration from the oral tradition of the Philippines, where his parents trace their roots.

Lamson’s first novel Bodies of Water reflects his fascination with the mystical wonders of a distant land that he has heard a lot about in stories as a child.

“Bodies of Water, is a love letter; a missive to the strong Filipinas in my life, and a prayer to the homeland whose creatures and myths I grew up wondering about and wondrous for,” Lamson writes on his website yveslamson.com. “It is also a wistful note to the Philippine plantations my mother’s family have cared for through generations. This book is a documenting of the cultural myths my father put me to bed with and a revisionist take on them.”

On December 7, 2018, Lamson launched his novel at the Sentro Rizal Toronto, the cultural hub of the Philippine Consulate General in Toronto.

Colleagues of Lamson in the literary group Pluma Collective also introduced their works in the event.

On the site of the e-commerce giant Amazon, Bodies of Water is described as one that follows the lives of four generations of women, who have an “innate ability to speak to water”.

Straddling the “border between reality and magic”, the novel is “set against the lush and vibrant backdrop of rural Philippine life”, where “familial myths collide with historical events and people”.

“All the while, creatures of legend and folklore pulled from the rich tapestry that is the Philippine oral tradition lurk just beyond the safety of home in the dark, deep jungle,” according to Amazon. “Vida, Valentina, Lailani and Karagatan know the secrets of the body; the water in each of us speaks to them. These women are healers, survivors and mothers.

“Yet more than simply tracing the lineage of these women whose personal history is weighty with magic and mysticism, Bodies of Water anchors these women to reality, placing them within historical events,” the e-commerce platform continues. “World War II, the Japanese occupation of the Philippines, the reign of Marcos, and the subsequent diaspora of the Philippine people serve to ground — not drown these women, for they've learned to breathe underwater.”

Lamson holds a degree in arts from York University. He majored in English and creative writing. He also holds a certificate from the Humber School for Writers.

In addition to the Toronto-based Pluma Collective, Lamson is also a member of the Filipino-Canadian Writers and Journalists Network.

On his website, Lamson states that he “hopes to bring Philippine culture to the Canadian literary scene by way of his stories”.

Lamson is currently based in Stouffville, Ontario.