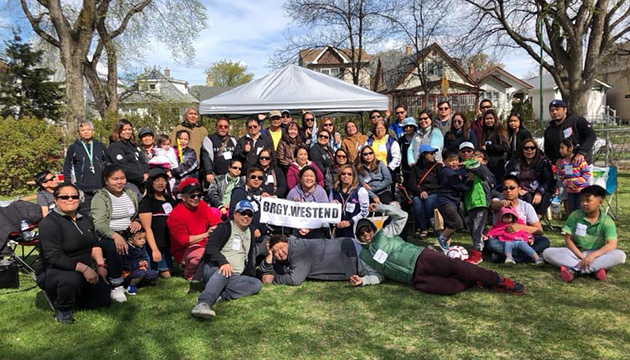 The word “barangay” is deeply rooted in Filipino culture.

Literally translated, it means “village”. More than just a unit of governance, it evokes a sense of community.

Its origins go back to when settlers of Malay origin came to the islands that would later become the Philippines during the Spanish colonial times. They arrived in sailboats called “balangay”.

In a Winnipeg neighbourhood, a group of Canadian Filipinos has drawn inspiration from the word in turning community grief into acts of volunteerism.

On August 24, members of the group cleaned up the streets near schools and playgrounds, picking up litter as well as discarded drug injection needles.

“We have to set a good example so when our kids see that we're doing this for them, then the next generation will do the same, I hope,” Fhem Manansala said in a CBC report.

In a report by CityNews Winnipeg, Ruby Malapit said that Barangay West End wants to send a message.

“There’s a group that cares for the community,” Malapit said.

Adao, or Jimboy to friends to family, was killed in his West End home on March 3, 2019. Police described the incident as the result of a random home invasion fuelled by drugs.

Two men have been charged for the death of the young man.

“We felt every sorrow that day," Manansala said toldCBC. "We wanted to give something back and keep everybody safe, if we can. We're all mothers, fathers, brothers, sisters. We want everybody's kid to be safe."

According to Manansala, other “barangay” groups have also started in areas in Winnipeg, like the North End and West Kildonan.

On its Facebook account, Barangay West End states that its mission is to “help people in the community to promote safety and awareness in our neighborhood”.

It wants to have a crime-free neighbourhood, where members are active in promoting safety in the area.

Barangay West End is planning programs like sharing rides for people, especially those who work late at night or are going to medical appointments.

The group is also thinking of services like roadside assistance for people whose cars are experiencing troubles, like a flat tire.

According to Ouelette, people often forget that they have neighbours who are willing to help the community.