Once there was Baybayin, the Philippine’s pre-colonial syllabary - a set of written symbols that represent syllables which make up words. It thrived not just among the affluent but in all levels of society. Characterized by its wave-like script, Baybayin surprised curious Spaniards in its wide use as the prevalent reading and writing communication mode at that time.

Fast-forward to today, Baybayin remains a functionally dead script, unused in any of the country’s dialects. In recent times however, its revitalization has been recognized by some Filipinos within and outside the country who are passionate about its significance as a window to Philippine heritage.

Despite Baybayin’s significance, it is only taught in passing in elementary schools in the Philippines today, much like a museum artifact, or as an FYI. Most immigrants arriving in Canada today or in the past are not familiar with this ancient script. Filipino parents in Canada today are likely unable to teach their kids Baybayin, hence creating a void for Filipino Canadians curious and eager to trace the richness of Philippine culture.

From a commonly used script, Baybayin today is a novelty seen in artworks, tattoos, and other design aesthetics, its value revived as a contemporary craft. Pop culture has become an important engine for its revival especially for those of Filipino heritage reconnecting with their roots. Filipino-American tattoo artist Aleks Figueroa and digital artist Kristian Kabuay exemplify laudable efforts in popularizing Baybayin in their creative works. 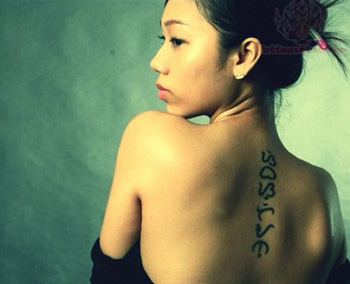 Ironically, one can sometimes find a greater passion about one’s heritage and a yearning for what is back home when distant from the motherland. Distance makes the heart grow fonder, not necessarily in the romantic sense, but in a truly nationalistic one. Even Dr. Jose Rizal, the country’s national hero, learned Baybayin while in Europe.

The interest in Baybayin has certainly shifted from being a novelty to possibly a deeper and growing revival movement. Resuscitating languages is not new. Gaelic is an example - the once dying language was revived with great success by the collective advocacy of the Irish. Today signs all over Ireland use Gaelic first, preceded by English. Hebrew is another example of a language that had no native speakers in the eighteenth century, which today is spoken by nearly eight million people, according to a Yale research. If Gaelic and Hebrew made their comebacks, then a possibility exists for Baybayin. 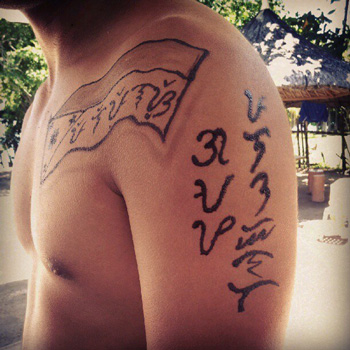 A man with baybayin on his arm and on a Philippine flag design.

The future of Baybayin faces the question: “what are we going to do with it?” Are we going to curate it as an aesthetic, or are we going to create a national movement to resurrect it, much like what Ireland did? For the FilipinoCanadian, how are we going to approach it? Revive it as a popular trend in liberal fashion,or revive it conservatively as a sacred art with careful treatment? While we are left with various questions, whatever we decide will ultimately define what we value collectively as a nation.

Even if the new trend is revival through artistry and pop culture, Baybayin awareness marks the first few steps in its resurgence and its continuous evolution. Languages and even cultures change.Whether our approach to Baybayin revival becomes a national movement or simply a mainstream fad, we are blessed to still have something unique to be proud for.

Paolo Fresnoza is a former Assistant Professor at the University of the Philippines in Diliman, Quezon City, and currently teaches travel and tourism at Eton College in Vancouver. His interests are about all things culture and travel, which led him to take doctorate studies about Indigenous Knowledge and Disaster Risk Management at Royal Roads University.