Filipino, as we know it today, was instituted as the national language of the Philippines in 1937. It was taught in schools as early as the 1940s but the Department of Education did not adopt the name Pilipino until 1959. Before that, it was just called the National Language.

During the early development of the national language, some of the new words that were borrowed or invented were so well received that today most people think that they were always Tagalog words – words like bansa, lungsod, katarungan, kalayaan and bantayog (nation, city, justice, freedom, monument).Many of these words are the legacy of one man who passed away in 1919, almost two decades before the official birth of the national language. He was Eusebio T. Daluz and he was one of the founders of the Akademya ng Wikang Pilipino (Academy of the Filipino Language).The academy’s aim was to establish a common Filipino language and in many ways, its vision was far more radical and inclusive of local languages than that of any of the institutes, surians or 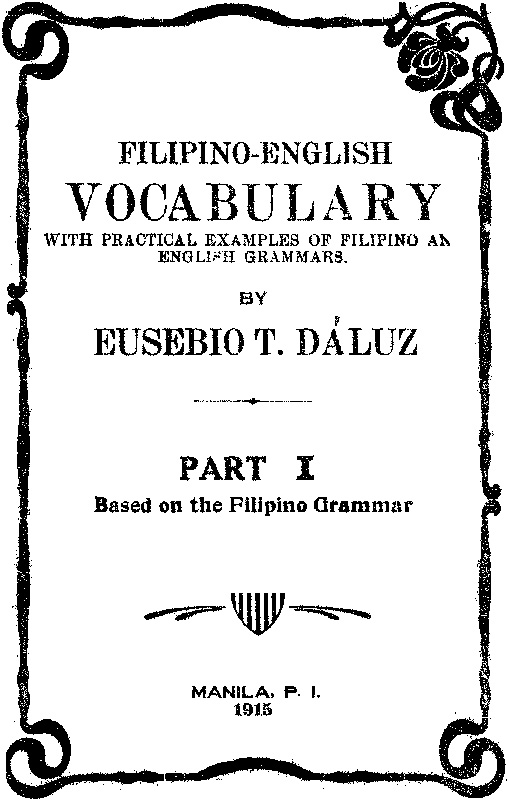 commissions that were established later in the century.

A new dictionary for a new language
As secretary of the academy, Daluz began to compile its official dictionary in 1910 – a task that would take him five years to complete. In the introduction to his 1915 Filipino-English Vocabulary, he said:

“[The vocabulary] is a mixture of different Philippine dialects with the Tagalog as basis. Most of the words, of course, are Tagalog, but a large number are also taken from the Visayan, Ilokano, Bikol, Pampangan and other native dialects, all of which are Tagalized.”This pretty much describes what the official Filipino language was supposed to be but never was.

It is fascinating to leaf through this old book and see what the Filipino language might have become. The spelling was similar to what we know today. The reforms that Jose Rizal had proposed were widely accepted by that time. The letters k and w were used instead of the old and awkward Spanish conventions that spelled those sounds with c, qu and o or u. Ng was used too, but it always had a tilde ˜ above the letter g as did the word mga.

However, some of the words are strange to us today and some of the sentences look like a completely different language. The grammar section is particularly baffling because the grammatical terms are not the same ones taught in Filipino classes today, which were invented by Lope K. Santos in the 1940s. The Daluz grammar includes terms like nama, badyâ, halipinama, lampibadyâ and sugnó for noun, verb, pronoun, adverb and adjective, respectively.

Fewer double meanings
Especially interesting is how Daluz proposed to make the language more precise by reducing the number of words that have double meanings. For example, instead of using the Tagalog word araw to mean both day and sun, he borrowed the Visayan word adlaw to take on the meaning of sun and retained araw for day. Similarly, buwan still meant month but bulan meant moon. A dahon was a leaf, while a bayhon was a page. Takna is listed as the word for “a period of time,” which would have left panahon as the word for weather only, but curiously, it was still listed with both meanings. Daan retained the meaning of a road or passage, but as the number 100, it was replaced with gatos, which is the Visayan word for hundred. Ironically, it is also the forgotten Old Tagalog word for million.

Speaking of numbers, the Academy’s proposed vocabulary had words that went far beyond millions, billions and even trillions. It had words all the way up to turuangaw or one decillion. That’s the number one followed by 33 zeros, or in Europe, one followed by 60 zeros.

Forgotten inventions
So many words in the dictionary were potentially useful, if only they had been adopted into general use. Gamlang was the word for industry. Kadám was proposed as the word for senate and a senator would have been called a kadamnin. Bansa, of course, meant country, but there was also himansaan, which meant state. Dunà took the meaning of “being,” which made a fine companion to the word diwa, meaning spirit or consciousness. A human being was a dunangtao.

Even the simple conjunction “or” was adapted from the Visayan ug, which became og to replace the Tagalog/Spanish o. It was even used throughout the dictionary in the headings and explanations.

Daluz not only made excellent use of native words to enrich Filipino, he also borrowed Visayan grammar to make derivative nouns and adjectives. For example, lungsod meant city, just as it does today, but there was also lungsuron for civic, lungsurunan for civics, lungsuranin or lungsudnin for civil, and linungsudnin for civilized. Filipinos were called Pilipinos, the country of the Pilipinos was called Pilipinhan and the adjective, Philippine, was Pilipinhin.

A truly national language
Of course, the Pilipino language in the Daluz dictionary was not the same Pilipino that later became the official national language. The official Pilipino had fewer borrowings from other Philippine languages and the grammar was based almost exclusively on Tagalog. But the vision of Eusebio Daluz and the old Academya is not completely dead. In 2001, the Sentro ng Wikang Filipino at the University of the Philippines produced the first edition of the ambitious UP Diksiyonaryong Filipino, which is one of the first major Filipino dictionaries written completely in Filipino without English definitions. Although it contains many foreign words that are commonly used today, it also contains many Old Tagalog words and thousands of words from languages all over the Philippines. It brings together the linguistic wealth of the entire country. Perhaps coming generations will discover this treasure and use it to form a truly national Filipino language.