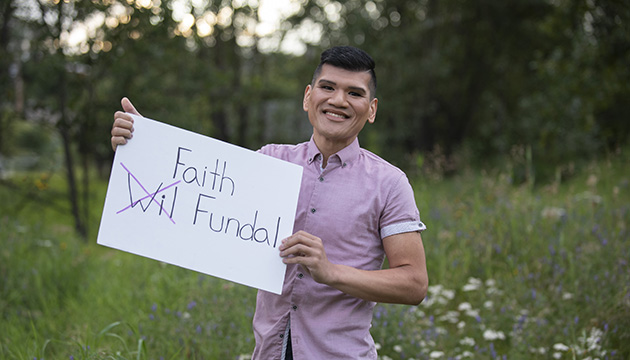 The Canadian Filipino journalist was fresh off the success of the podcast They & Us, which got wide airplay on various podcasting apps, as well as vast promotional coverage across the country on CBC Television.

They & Us explores gender identity, expression, and being non-binary. Fundal delves into these subjects with curiosity and compassion. The CBC newshound is non-binary in gender, and uses “they” and “them” as identifying pronouns.

“I’m a reporter who has these experiences and I would like the listener to come with me to figure it out because I’m also still figuring it out,” Fundal said in an interview. “But there are enough people out there who want to know more.”

“There is no one place where people can go if they want to know more, and the podcast does that. It’s sort of a bridge between people like me who have some experiences, and people like Harper (Perrin, a person profiled in the podcast) who have had more experiences, and people like my other family members and friends, who may know someone who is non-binary or transgender, but they’re too worried to ask about it because they’re uncomfortable,” Fundal explained.

And then there was COVID-19. Fundal, like the rest of the world, was confronted with a world in the midst of a pandemic. Production of the podcast had to be paused briefly as resources at the public broadcaster were refocused and reassigned.

The novel coronavirus also touched Fundal’s own family, when their father Wilfredo was diagnosed in early March. The experience provides a dramatic scene to the podcast’s first episode, when Fundal is asked by hospital staff if they are the patient’s son. Having used the “they” and “them” pronouns for a while now, Fundal describes the moment as stomach wrenching.

Early on in the interview, Fundal was asked about the importance of using the right pronouns.

“People think that pronouns are preferences, but they’re not,” Fundal said.

Illustrating the point, the CBC journalist said: “You identify as a man because you are, not because you want to be man. You’re not preferring to be a man. I’m non-binary not because I prefer to be non-binary. Trust me, my life would be a lot easier if I was just a cis person.”

Another example Fundal gives is that if one’s name was Joe, and they were called Bob, it would deserve a correction. And it’s not difficult to realize it’s at once thoughtless, and at another, provocatively disrespectful. Fundal stresses that limiting pronouns to “he” or “she” only is restrictive, and ignores the experienced oppression of people who are non-binary.

When Fundal and their family arrived in Canada in the 1990s, residing in Richmond, B.C., they used the name Faith until children and teachers at school would make fun, calling it a girl’s name. Asked how they got Faith as a name, Fundal says it came from a grandmother who suggested it after Fundal was born overdue and was sickly as a baby.

And so, Fundal began using Wil, short for Wilfred, their birthname, inspired by their father’s name.

Part of the second episode of the podcast took place at a Filipino eatery on Commercial Drive in Vancouver with fellow journalist, Michelle Eliot, host of CBC Radio’s province-wide midday broadcast BC Today and also of Filipino heritage.

Eliot unexpectedly asks Fundal if they would ever go back to using Faith. Fundal was taken aback by the food for thought; but because their sizzling lunch arrives, Fundal was glad to dine rather than chew on the question.

Early on August 10, 2020, followers on social media were greeted with a photograph Fundal holding a card that had written on it their name, with Wil crossed out, and Faith written above. The post is well-liked on Facebook, Twitter, and Instagram with many well wishes in the comments, cheering Fundal’s reclamation of their name.

George Orr, a former instructor at the British Columbia Institute of Technology’s Broadcast Journalist program, had Fundal as a student.

Orr had this to say: “[Fundal] was appropriately nosy and detail-oriented, and was never afraid to ask anybody anything, whether in class, or working as a starting reporter.”

According Orr, Fundal “is a force to be reckoned within Canadian broadcasting”.

As for Fundal’s father, he has recovered from the coronavirus, and is doing well. Faith Fundal has done well too. In a year when the professional and personal have intersected, Fundal has faced this year with an aplomb that is admirable, and a candour that is refreshing, and inspiring.

They & Us is produced by Andrew Kurjata, and hosted by Fundal. It can be found on CBC Podcasts, Apple Podcasts, Google Podcasts, Spotify, and other streaming platforms. A seventh episode is currently being produced. For more: www.cbc.ca/theyandus.

Since 2002, Joseph Planta has been interviewing guests of the On the Line podcast at www.TheCommentary.ca. His Twitter handle is @Planta.