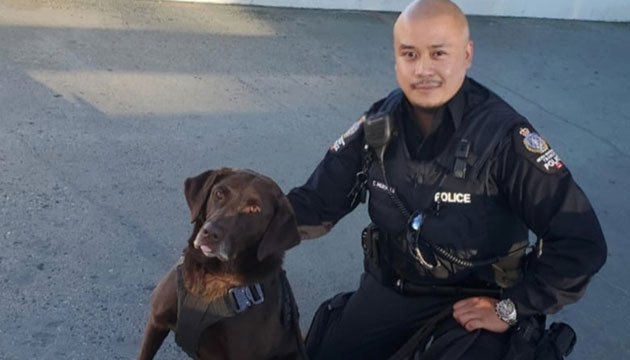 When Constable Clint Hervias went to the Philippines in February 2020, it was to grieve the death of his father.

Amid grief, the pandemic happened but it also happily and unexpectedly got himself acquainted with a heritage Hervias grew up with but never quite experienced.

When he found himself in a lockdown and unable to fly back to Canada, he did what he knows best as community police with the Metro Vancouver Transit Police- mobilizing townsfolk to help those in need in his father’s hometown of Culasi, a small municipality of about 40,000 people in Antique province in the Philippines.

In an exclusive with Canadian Filipino Net (CFNet), Hervias remembers that soon after his arrival, “The Philippine National Police and other partner interagency security forces were granted sweeping authorities to enforce string barangay border controls and curfews which ran from about 8:00 pm to 5:00 am daily.” The community members complied with the restrictions but found themselves out of work and income, particularly those in far-flung areas.

What started out as a tiny gesture spread like wildfire. “In a small town like Culasi, the news gets around at lightning speed and social media tends to add legs to a story,” Hervias tells CFNet. “I began receiving direct messages from social media from local donors and then overseas Filipinos and before I knew it, we were receiving extremely generous donations of food, funds for more relief goods and offers to join the team.” TV Patrol in Iloilo caught wind of the story and featured him in a segment. “It aired nationally and everything sort of just took off from there.”

Hervias had always felt a disconnect with his Filipino heritage, despite having Filipino parents. His father Roberto worked as an engineer for Saudi Arabia’s ARAMCO in the 90s before moving to Zambia for work in the manufacturing sector. His bride Rhodora followed him to Zambia where the Hervias family grew. Hervias holds an African birth certificate but citizenship in Canada where the family moved when he was seven years old.

Hervias’ calling has always been in community work. He tells CFNet that before he started his career with the Metro Vancouver Transit Police, he had always been involved in community work in Surrey where he lives. He adds, “I started out volunteering in a crime prevention program for the Surrey Crime Prevention Society and was later hired as a program coordinator for Surrey’s Newton Community Volunteer Patrol program while completing my diploma in criminology.” 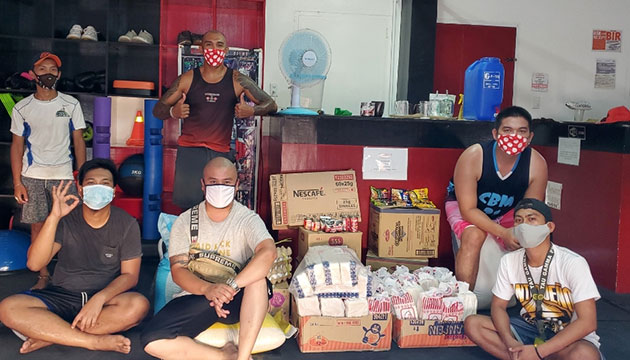 Hervias (seated, second from left) joins members of the Culasi community with the distribution of relief goods to nearby Mararison Island.

In initiating relief efforts in Culasi and Mararison Island, Hervias gives credit to community leaders Hardy Donasco and Deo “DJ UKAY” Alising, a local radio personality who allowed Hervias to solicit donations locally at first. However, it was Donasco that paved the way for Hervias to connect with local PNP officers in Culasi, the PNP Maritime Group and the Philippine Coast Guard who all pitched in to distribute relief goods. “Working with the PNP was such a pleasure. It was really such a seamless process and once the program gained considerable steam, I was offered the resources and assets of the PNP to expand our relief goods efforts to further outlying communities and to nearby Mararison island.” Hervias was amazed. “It was surreal and impressive to see everyone just pulling together in helping the communities.”

The swiftness by which the relief and food distribution operations cemented Hervias’ belief in the Filipino spirit. “I feel the program had its biggest impact in empowering the community to give,” he adds. “I saw people from all walks of life in that town reach out to give whatever they could spare. I’m really proud of the people of Culasi for coming together and I feel it truly is a Filipino thing – it’s just in our national character to give and to take care of each other.”

The experience benefitted him as well. “It’s helped me survive and thrive during this difficult time, so as much as I would like to take credit for the project, it was already in the people to give – I just sort of started it off so everyone can be inspired and do what comes naturally.”

Hervias is now back in Canada, having followed all safety protocols here and in the Philippines. The return to Canada was seamless but the process to leave the Philippines was a different story. He remembers, “We had to obtain medical clearance certificates, passes from the local PNP and accompanying travel permits from the COVID-19 Inter-Agency Task Force,” aside from providing proof of travel documents and flight bookings. “After several prior attempts to flying home, we had our fingers crossed and were on edge the entire time.”

Thankful for the opportunity, Hervias now has an unmistakable connection to the homeland. “My time in the Philippines was a once in a lifetime experience and I take away from it a tremendous amount of appreciation for my history and a new faith in humanity as a whole.” He confirms, “In my law enforcement role, I see a lot of worst in people; however, let me tell you – we are an infinitely optimistic species – I was able to see the best in people as we all pulled together to take care of self and community.”