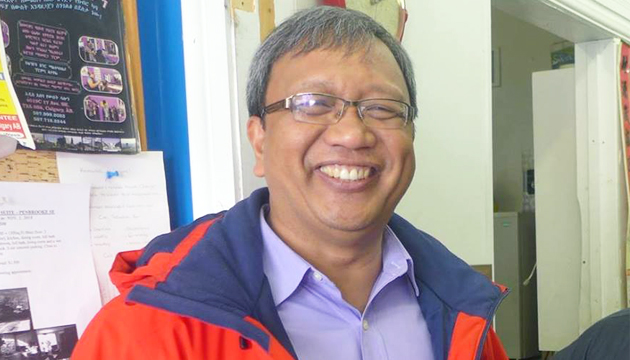 Cesar Cala has served the greater community in Alberta for more than two decades, and he is not about to fade away.

Even though Cala and the provincial NDP did not secure a mandate in the April 16, 2019 election, the veteran organizer has pledged to continue working as an advocate for social causes in Calgary.

Alberta’s NDP sought a second term but was toppled by the United Conservative Party of Jason Kenney.

Cala ran with the NDP in Calgary-East, one of the 63 seats won in the election by the United Conservatives.

On social media, Cala thanked his supporters and volunteers in the campaign.

“I have learned so much from all of you and this experience has deepened my appreciation and commitment for the need to organize and strive for social change,” Cala declared.

According to Cala, there is much to be proud of from the campaign.

“We have talked to thousands of people and walked down hundreds of streets in this riding,” Cala said. “We communicated what this campaign was all about – striving to make Calgary-East a greater place to live, to make a living, to raise a family, to learn and to connect to the community.”

Before running in the election, Cala was employed as a special advisor with the Alberta NDP government of Premier Rachel Notley.

An immigrant from the Philippines, Cala was involved in the founding of numerous organizations, including the Sunrise Community Link Resource Centre, the Ethno Cultural Council of Calgary, Children’s Legal and Educational Resource Centre, and the Asian Heritage Foundation.

As a special advisor to the provincial government, Cala was responsible for building engagement between ministries and diverse communities.

Cala has been recognized for this work, including a Governor General’s Caring Canadian Award in 2015, a Queen Elizabeth II Diamond Jubilee Medal in 2012, an Immigrant of Distinction Award in 2009, and an Alberta Centennial Medal in 2005.

Meanwhile, the majority win of Kenney’s United Conservatives was not able to sweep Canadian Filipino candidate Marjorie Newman to victory.

Newman, an immigration consultant, ran with Kenney’s party in Edmonton-Glenora, a seat kept by Alberta’s NDP.

Like Cala, Newman is an immigrant from the Philippines.

Benito served only one term after losing his party’s nomination in the next election.

No other Canadian Filipino has been elected to the Alberta legislative assembly since 2012.