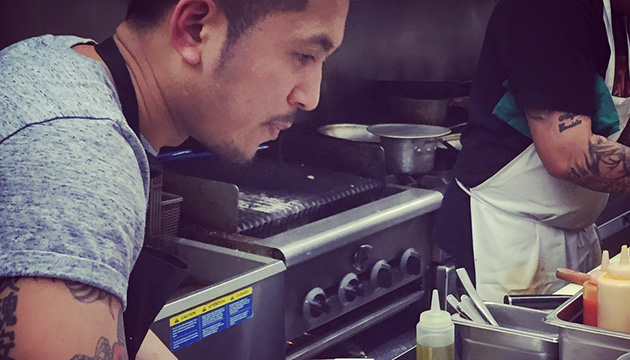 Located in Downtown Toronto, Lamesa Filipino Kitchen has been earning enthusiastic reviews. Chris Nuttall-Smith wrote in the Globe and Mail in November 2015 that since it opened in 2012, Lamesa has “grown into a three-star restaurant”.

“It should be near the top of every Toronto diner’s must-try list,” Nuttall-Smith enthused following three visits, wherein he sampled everything from crispy lechon pork belly to tuna kinilaw, crunchy lumpia rolls, halo-halo desert, and ubeleche flan.

The critic commended Lamesa’s chef, Daniel Cancino, for his refined cooking that is rooted in Filipino culinary tradition.

Born in Hong Kong, Cancino lived in Manila as a young boy until his family moved to Richmond in B.C. when he was 10. The Cancino family relocated to Mississauga in Ontario when he was 15.

“My flavours come from growing up in the Philippines, but my technique is definitely Canadian,” Cancino said in the article.

“Our food is not traditional Filipino but rather Filipino inspired,” the establishment states on its website.

Here’s how Lamesa describes the fusion of cultural influences in Filipino cuisine: “Imagine a native Malay cook with a Chinese roommate being taught by a Spanish Chef with a love affair for everything American and you will begin to understand what Filipino food is all about.”

Amy Pataki of the Toronto Star wrote in a review not long after Lamesa opened that it’s “high time the Filipino community got a restaurant to be proud of”.

“Lamesa Filipino Kitchen is a worthy ambassador of the archipelago nation. Its contemporary presentation and deconstructed riffs on traditional sour-salty-sweet flavours broaden the appeal of Filipino food beyond the 200,000-strong community,” Pataki noted.

In October last year, blogTO, a local blog, included Lamesa in its list of top best tasting menus in Toronto.

In a previous review, Liora Ipsum with bloTO wrote that Lamesa’s owners “totally get it, the menu is pretty much designed for noobs like me”

Ipsum also wrote: “The menu tasks itself with being true to authentic flavours and ingredients, but also presenting the food in a contemporary way.”