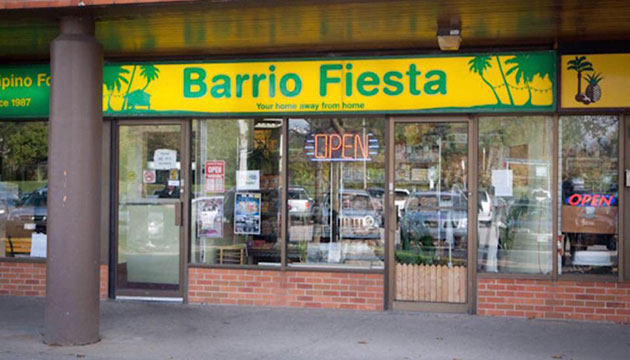 This Toronto restaurant doesn’t have the logo that is easily recognizable to many Filipinos.

It’s the image of a banga (clay pot) cooking over flames shaped like the letters B and F. B and F stand for Barrio Fiesta, a dining institution in the Philippines.

Famous for its kare-kare (peanut-based stew) and crispy pata (pork hock), Barrio Fiesta started at the home of Sixta Evangelista Ongpauco on Highway 54, now EDSA, in the city of Caloocan in 1952.

It prospered to become a restaurant chain with several local and international branches.

Like many restaurants in different overseas Filipino communities, this dining establishment at 19 Lapsley Road in the Scarborough region of Toronto adopted the name, likely because of its sentimental appeal.

It’s not an “original” Barrio Fiesta, and in fact, a branch of the real Barrio Fiesta chain of restaurants opened in Toronto at 2215 Steeles Avenue West in 2013.

This franchise restaurant actually carries the full name The Original Barrio Fiesta-Canada. And yes, its logo has the clay pot image.

However, the one in Scarborough came much earlier by far in 1987. Its slogan: Your home away from home.

Although it’s not connected with the chain, Barrio Fiesta at 19 Lapsley Road has become an institution in itself among its clientele.

A person by the name of Jonray D. of Markham, Ontario, obviously of Filipino heritage, expressed best what Barrio Fiesta is at Yelp, a popular online directory for local businesses like bars, restaurants, and cafes.

“Barrio Fiesta is the OG [slang for old, authentic] Filipino restaurant in Scarborough! One of the best Filipino Restaurants that sell authentic Filipino cuisine.

“I've been there since I was a kid growing up in Scarborough, and I usually had Dinuguan, Menudo, Kaldereta, the best Hopia in the city, Bangus, Halo-Halo and Coconut Drink,” the person wrote on the site.

Amid the ongoing COVID-19 pandemic, the local Scarborough Mirror looked back at how this Barrio Fiesta started.

In a report made available online at the Toronto.com website of the paper’s mother company, journalist Mike Adler spoke with Joseph Lo, who started the restaurant in 1987.

“We started with just a few friends. From small, it became bigger and bigger,” Lo said.

Lo started the restaurant with his wife, Leticia Lo and other partners from Scarborough’s Filipino community.

“All the people grew up with our food,” Lo related.

According to the report, Lo is Indonesian-Chinese. He met his Filipino wife after they immigrated to Canada.

Lo said that Barrio Fiesta formed to stage fundraising events at St. Barnabas, a Roman Catholic Church, across from Malvern Plaza, where the restaurant is located.

The Lo’s have retired from the business.

In 2010, the Scarborough Mirror recalled, Barrio Fiesta’s other partners sold their shares to a third owner, Nanita Masangkay, Leticia’s sister.

“Actually, everything here is good. That’s why we’ve been here for more than 30 years,” said employee Michelle Trajano, who is a niece of Leticia.

Because of the pandemic, the restaurant closed temporarily last year. Now it operates with reduced hours.

Barrio Fiesta’s dining area is currently off limits. However, clients can order and take home their favourite Filipino homestyle food.

As journalist Adler wrote, generations of loyal customers have kept Barrio Fiesta going for more than 30 years since 1987. They’ll keep it going “even through the pandemic”.