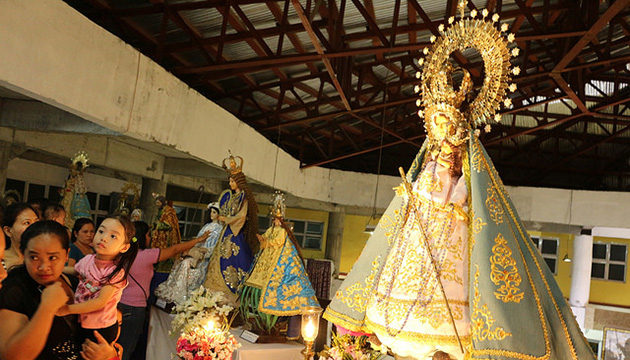 We’ve all heard these questions before. This uncertainty in spelling is due to the intertwined history of three languages – Spanish, English and Filipino. The country we call the Philippines today is a collection of about 7,100 islands in Southeast Asia that was once a colony of Spain. When the Spaniards arrived in the early 1500s, there was no single nation united under one name, but rather, many autonomous chiefdoms, each with it’s own name and leader. The Spaniards called different parts of the archipelago by various names – New Castile, the Spanish East Indies, St. Lazarus and others, but eventually they settled on one name for all the islands; Las Islas Filipinas. This name was given to honour their Prince Philip who eventually became King Philip II, who is remembered on this side of the world as the king who sent his Armada to attack England in 1588.

Filipinas
Of course, Philip is just the English version of the Spanish name Felipe, so Filipinas was usually spelled with an F. I say “usually” because spelling was not yet standardized back then. Practically every possible variation of spelling can be found for the word Filipinas in books of the 1500s and 1600s – Filippinas, Philipinas, Philippinas and even Piliphinas.

Philippines
Las Islas Filipinas, translated into English, is “the Philippine Islands,” spelled with Ph to match the spelling of Philip. The name was shortened sometime after World War II, so now we just call it the Philippines.

Filipino
The Spanish word for a person from Las Islas Filipinas was naturally Filipino, with an F. Originally this referred to a Spaniard born in the Philippines, not to an indigenous inhabitant of the islands. The people we know as Filipinos today, the Spaniards once called Indios. English never had a suitable equivalent for the word Filipino, so the Spanish word was adopted, retaining the letter F and the suffix, “ino.”

Pilipino
After the Spanish-American War at the end of the 1800s, the Americans held the Philippines for almost 50 years. During that time, Filipinos developed a national language of their own. This language was called Pilipino. It was based mainly on Tagalog, which is the language of the region around Manila. Pilipino was spelled with a P because there was originally no F sound in Tagalog or in most of the other 170 languages and dialects of the islands. Thus, F was not included in the official Pilipino alphabet, known as the abakada. So, the national language became, Pilipino, the people called themselves Pilipino and Pilipina, and they called their country Pilipinas.

Back to Filipino
As time went on, the authorities in charge of developing the national language had to accept the fact that foreign words and sounds were already a part of everyday Pilipino speech. They overhauled the abakada in the 1970s and 80s to include some foreign sounds such as F. Today the language is officially called Filipino and the country is Filipinas, though “Philippines” is still the English name. The official Filipino language recognizes both Filipino and Pilipino, and their feminine forms, as acceptable terms for the citizens of the Philippines.

The Filipino language
Another curiosity for some non-Filipinos is, “What do Filipinos speak? It’s like Spanish, right? What’s it called? Tag-a-Log?” Some people mistake it for a kind of pidgin Spanish while others assume it is like Chinese or Vietnamese. However, Tagalog (pronounced tah-GAH-log) and other languages of the Philippines are, in fact, languages in their own right. While Filipinos sometimes talk about their own particular “dialects,” such as Cebuano or Ilokano, these are actually distinct languages, not mere dialects of Filipino.

The Philippine languages share a common ancestry with the languages of Malaysia and Indonesia. Many basic Malaysian words, like numbers and parts of the body, are so similar to Filipino that a Tagalog person hearing them might mistake them for another Philippine language. All these languages are part of the Malayo-Polynesian family of languages, which stretches from Madagascar, just east of Africa, all the way to Easter Island, just west of South America.

Filipino and the regional languages of the Philippines have a rich vocabulary with borrowings from many sources, thanks to a long history of trade contacts with many neighbouring countries. The Chinese brought many words related to food, cooking, business and even family-related terms like kuya and ate for eldest brother and eldest sister. Hindus and Muslims from Malaysia and Indonesia brought words with roots going back to the ancient Sanskrit language of India – words related to the arts and religion, like katha, likha, and diwata (literary work, creation and goddess).

The Spaniards brought words related to Christianity, government and technology up to the 19th century. Eventually, Spanish words even displaced some basic indigenous words like bisig for arm, which is more commonly called by the Spanish-derived term braso. The word boses, from the Spanish voz, for “voice” is used more often than the Tagalog word tinig.

English now supplies the majority of words related to modern technology, arts and pop culture. With this mixture of borrowings, regional languages and the common use of Tagalog/English slang (Taglish), it’s no wonder that some outsiders can’t properly describe what they hear when Filipinos are talking to each other.

To sum it all up:
• Philippines is the English name for the country, while –
• Filipinas is both the Spanish and Filipino name for the Philippines.
• The people are called Filipinos in English, Spanish and Filipino,
• But many Filipinos still prefer to call themselves Pilipino and their country Pilipinas.
• The national language is based on Tagalog but it has many words borrowed from languages near and far. For a time it was called Pilipino but now its official name in all three languages is Filipino.

Oh, and Philipino, Philippino and Phillippino? Well, those are just wrong.