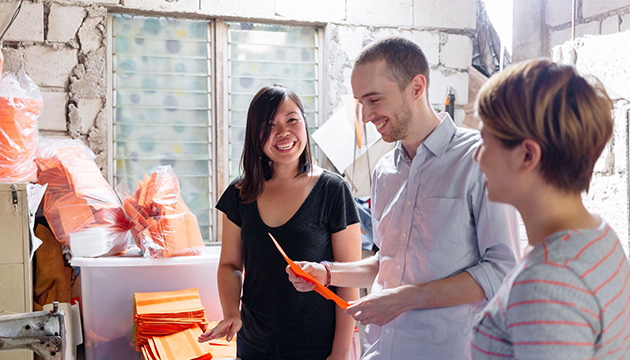 In her company blog, Gelaine Santiago second guesses herself. “I remember (being) in my early twenties …

I would read about the award winners and think how accomplished everyone was. I hoped that one day I would be deserving of this award too,” she writes.

Santiago is this year’s lone Filipino recipient of the RBC Top 25 Canadian Immigrants Awards. “Now that the day has come, my reaction is not what I expected.”

Santiago is the co-founder of Cambio & Co., an e-commerce fashion retail company that features products designed and handcrafted in the Philippines by select Filipino artists and artisans. (See: https://canadianfilipino.net/sections/business/cambio-market-small-ethical-business-makes-filipino-craftsmanship-go-mainstream)

She also co-founded the recently launched Sinta & Co. that sells wedding paraphernalia also made in the Philippines. (See: https://canadianfilipino.net/sections/lifestyle/toronto-based-one-stop-filipino-bridal-boutique-sinta-co-launched-online)

Before all these, she was a volunteer recruitment coordinator at the Sentinel Project, a Toronto-based non-profit focused on preventing mass atrocities around the world, and later became a member of its board of directors making her the organization’s youngest at the age of 24.  In 2012, she also co-founded the non-profit ChooseSocial.PH, a digital platform connecting Filipinos in the diaspora with social enterprises in the Philippines.

It is perhaps Santiago’s seeming self-doubt, but really introspection, that translated into her involvement with fair business practices and social enterprise that landed her the RBC award.

Santiago was only three when her family moved to Canada in the early 90’s. “My parents chose to leave the Philippines because at the time, they didn’t have stable employment,” Gelaine shares her story with Canadian Filipino Net (CFNet) which has supported Gelaine’s business undertakings since the early years of Cambio & Co. “They wanted to live in a country with higher wages and stable employment opportunities, all the things they would want for their children.”

The Santiago family of five began their new lives in a cramped apartment in the big city of Toronto, where an aunt already lived.

It took two whole decades before Santiago  went back to her birth country. In 2013, she and then boyfriend (now husband and co-founder) Jérôme Gagnon-Voyer travelled to the Philippines, an experience which jump-started the idea of a business that does social good. Santiago shares with CFNet, “While there, we ended up learning about an amazing community of entrepreneurs using fashion to provide sustainable livelihood for Filipino artisans who were creating quality products but simply lacked access to the global market.” The thought of how to help amplify the Filipino artisan’s impact never left the couple’s minds.

Both Santiago and Gagnon-Voyer were unhappy with their corporate jobs back then. “We wanted more meaning and so we decided to quit our jobs in pursuit of creating a business together,” she reminisces. Their shared Philippine experience in 2013 sparked the inspiration to establish Cambio & Co. “We knew we wanted it to be a business with meaningful impact.”

When the two got married in 2018, they wanted to celebrate both their families’ Canadian and Filipino heritage. Putting together a wedding that speaks to both families’ cultures made them realize they were not alone in such an endeavour and that there are couples around the world who would wish to celebrate a union of not just two people but also of two heritage and cultures. In July this year, Sinta & Co. was born with the same ethical principles that its sister company embodies.

In sourcing the products, the founders are particular about selecting both the prospective business partners and the products themselves. Aside from selecting products based on quality, craftsmanship and authenticity, they ask whether the business employs and supports artisans and whether the pieces represent Philippine culture in some way. Santiago adds, “Do they share a part of our history and preserve our heritage? Are they telling a meaningful story?”

The co-founders also place significant value on sustainability: where the materials come from and to what extent such ethical principles embedded into the partners’ business models. Santiago  and Gagnon-Voyer avoid companies that “greenwash” (using sustainability as a mere marketing ploy but not actually committed to the cause) and make sure they meet each partner to try to understand their business models. In short, do these companies walk their talk?

Santiago initially felt undeserving of the RBC award because she grew up in Canada, unlike the other awardees who had a tougher time in adjusting to a new way of life. She  writes in her blog: “I had the privilege of youth. I didn’t struggle the way my parents did to find employment, build a new community of friends or raise a family in a country of strangers.”

It was Gagnon-Voyer that asked her, “Is that all there is to being an immigrant – hardship?” She  realized then, “I may be the one whose name will be called up on stage, but this is not an award for me. It’s for all the people who have done the work BEFORE me.”

She cites her parents and her family’s humble Canadian beginnings, the Filipino neighbours who would babysit Santiago  and her siblings and Filipinos in Canada whose tireless work has led to the declaration of June as Filipino heritage month. “It’s because of them that stories of younger Filipinos like me can be shared and celebrated on a national platform.”

The journey to operating businesses with a social conscience was a leap of faith and is what Santiago  would advise CFNet readers: “There’s no such thing as a perfect idea or an ideal moment to be an entrepreneur. If you wait for those moments to come, you’ll be waiting for a long time. Don’t be afraid to make mistakes and always be willing to learn and grow.”