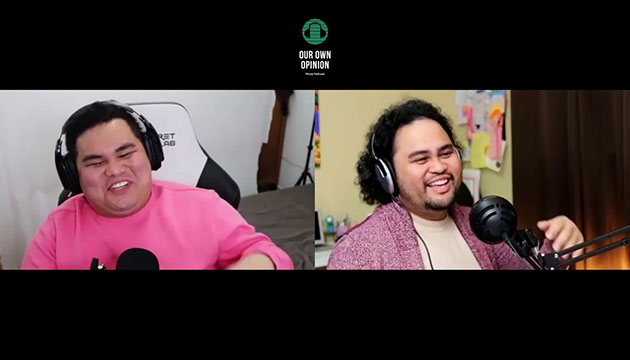 Erick Eterosa notes that many podcasts are about famous people, and he wants to do something different.

“I want to talk to regular people because they also have a unique story to tell,” Eterosa told Canadian Filipino Net when he connected about his Vancouver podcast called Our Own Opinion.

Eterosa hosts the show that started in July 2019. His younger brother John Carl is a recurring host.

They cover a variety of topics, ranging from serious issues like politics and finance to fun topics like sci-fi and love stories of Filipinos.

Their audience is not just the Canadian Filipino community. They also want to reach out to millions of Filipinos around the world.

“It started as a just for fun podcast, but eventually became a bridge to connect Filipinos globally and for their voices to be heard,” Eterosa said.

This is partly the reason why the show’s format is in both English and Tagalog.

Eterosa was born in Metro Manila to a family of Ilocano background.

The family immigrated to Canada and settled in Vancouver in 2001.

Eterosa works as a health care provider. He is also a photographer.

He is married to a Filipina nurse, and they have two boys.

His brother John Carl was also born in the Philippines. The younger sibling works as a building manager.

Eterosa recalled that the idea for Our Own Opinion was inspired by The Koy Pond, a popular podcast by Jo Koy, a famous Filipino American standup comedian.

His favourite episode so far on Our Own Opinion is titled ‘Single Mom in Canada’.

In that show, Eterosa held a one-on-one with Laura Gautreaux, a Canadian Filipino and single mom to three kids.

This particular February 7, 2020 episode titled ‘Born and Raised in Canada’ featured two guests, and the discussion included what many go through growing up outside the Philippines.

In an episode on August 12, 2019, Eterosa and a guest talked about climate change, an important issue facing the world.

Our Own Opinion is available in multiple social media platforms: