Long post but possibly worth the read for those of you who kayak and do not have experience in a rescue situation. I learned a lot in a recent weekend kayak camping at the Upper Kananaskis Lake west of Calgary. There was a lady on our group trip; let's call her Jane, who had a small boat and all her luggage in two big sacks.

Lesson 1: Don't load everything on the back of the boat. Luggage needs to be balanced front to back.

Lesson 2: Bring a spray skirt anyways. Weather and water are notoriously unpredictable. Be prepared. Know your equipment, know your abilities, and expect the unexpected.

So on the water, it was overcast and brutally windy. The wind was creating whitecaps, and we were getting blown and pushed about. Jane was falling behind, and we were all paddling hard. We all waited to make sure we stuck together, and we stayed near the shore to keep out of the choppy water. A few of us noticed she was quite back heavy, and apparently she was getting quite wet in her seat.

We could have noticed how much her back end was dipping, and offered to help redistribute the load. She could have asked us to wait up while she bailed some water out. If you have something wrong, even if you don't want to slow up the team or annoy anyone, it is still better to say something.

We stayed all together for most of the time, but near the end, Jane was lagging more and more, and I stayed behind to keep her company. I admit that I thought for a moment "why should I have to stay behind when I could be up there with the others having fun in the waves." I'm glad I stayed.

Lesson 4: Leave no one behind. Ever.

I looked over and noticed her back end was under water, and her backside was getting wet. I didn't realize it had gotten that bad. I told her to come grab on to my boat while we tried to bail her out, and adjust her luggage. She had lost her bailer in the water, and my safety bag from the rental place was missing the bailer.

Lesson 5: Even if they say it's in there, check the equipment bag anyway.

The rest of the group didn't realize that we had stopped to bail her out. With the wind and the waves, it was just not noticed that we had stopped, and started drifting into the lake. The water started climbing higher and she panicked. She said forget about bailing, and just get to the campsite. She pushed away from me, and started paddling hard further into the lake.

Lesson 6: Panic leads to irrational behaviour. Prepare to be assertive, a little mean if necessary, and think for two people.

As she paddled away, her cockpit quickly started to fill with water. She said "Oh my God, I'm sinking", and fell into the water with her boat underwater except for the prow.

Lesson 7: When things go south, they go fast and time gets a bit confusing.

Lesson 8: Leave the stuff, save the person.

I could have made it to shore much quicker if I had ditched the boat, extra paddle, and luggage.

We were struggling to make progress. I thought that the kayaks in the distance were our friends, and I assumed that they would see me charging for shore and that they would come back to help. Jane suggested I use the whistle to call for help.

Lesson 9: Don't assume someone will see.

As soon as she went in, I should have used the whistle. Better yet, use an air horn. We were heard, but only barely over the wind.

While we waited for the kayakers (who turned out to be two lovely ladies on the lake and our friends were nowhere to be seen), I continued to paddle us towards shore. I was exhausted and my arms were burning. One lady arrived first, and I passed the boat on to her so that I could just paddle Jane back to shore. When the second lady came, she offered to take Jane for a spell because I was exhausted and she could move faster.

While I was paddling, Jane was hyperventilating. I told her to keep kicking. I told her she was doing great. I told her to breathe deeply and slowly. I kept talking to her and telling here we were nearly there. She was so cold she couldn't feel her legs after mere minutes. It took everything she had to hang on to the boat.

The lady took Jane towards shore while I sorted out paddles and luggage. Once I was set, I caught up and took Jane for the final slog towards shore. I had no idea how hard it was to tow a person.

Lesson 10: It is bloody hard work to tow a person.

It’s difficult, especially when they are too cold to help by kicking. And the wind is constantly blowing you backwards. And you're trying to keep talking.

We made it to shore. I have no idea how long it took but it felt long. I docked my boat and grabbed my sleeping bag and blanket, while the other lady helped Jane on shore and out of her clothes. We wrapped her up in blankets, fleece, sleeping bags and Jane was so exhausted she just wanted to sit. She wasn't shivering. Just sitting there. So I sat beside her and put my arms around her, and rubbed, rubbed, rubbed.

Some hikers came by and asked if we were okay. I said yes. What?

I don't know what I was thinking. Maybe now that we were on land everything was okay. But it wasn't. Jane was hypothermic. Luckily the hikers prodded, and realized we did need help. There were a few groups I think, maybe 10 people in all. One group had a stove so they got some tea going. One lady had a dog who sat beside Jane for warmth. A couple of ladies helped me to get Jane into some warm socks, gloves, and clothes. A little boy offered Jane some granola bars.

Jane started shivering and her cheeks turned pink. Then I knew she would be okay. She had sugar, hot drink, dry clothes, and lots of warmth. Other helpers dumped her boat upside down to clear the water, took out her dry clothes and got her wallet, keys and other stuff.

After we returned from camping, I had a message from Jane saying she was alright.

Play hard and be safe. 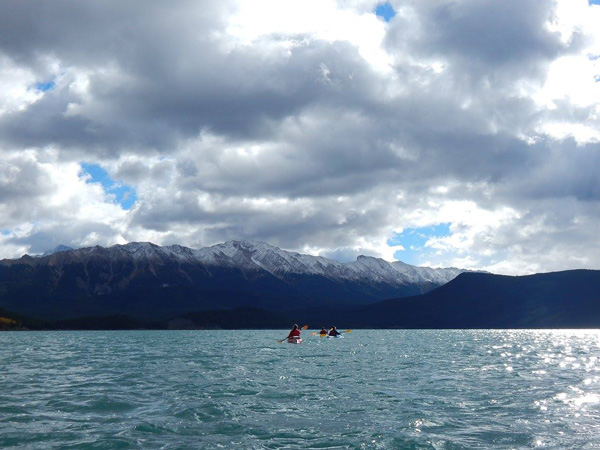 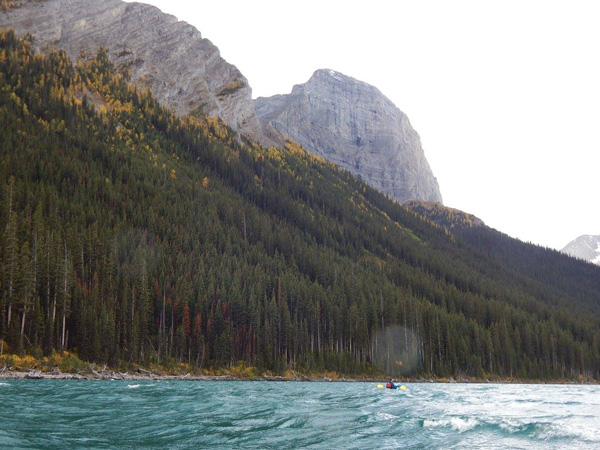 Leanne McLaren is a geotechnical engineer-in-training with a passion for the outdoors.  Among her favourite activities are kayaking, hiking, all-season camping, and horseback riding through the southern Alberta foothills.)