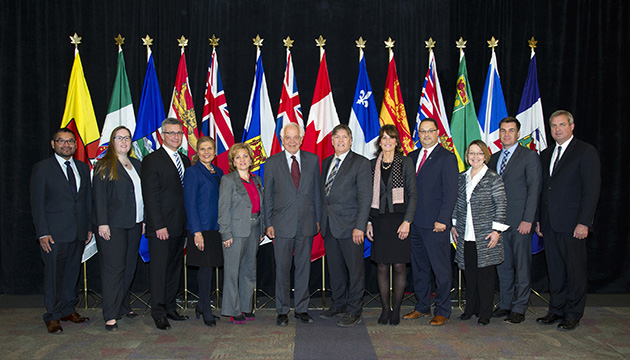 Eleanor Guerrero Campbell: Both the mandate letter to Immigration, Refugees and Citizenship Canada Minister John McCallum and the Speech from the Throne are re-assuring of the federal government’s commitments to deliver on its 2015 election platform on immigration.

That platform was well received by the Canadian Filipino community and, confidently, by other immigrant communities as reflected in our editorial at the start of this special November issue. What progress has since been made on the specific commitments and what are their implications or ramifications?

Rey D. Pagtakhan: I suggest we dialogue on the one-year progress that has been made on the list of commitments in the order they have been sequenced in Part I.

EGC: Do you see any ramification? Could you give an example of an issue and an initiative to illustrate your point?
RDP: One ramification I see is the development of expectation, on the part of the immigrant communities, that cabinet – the government of the day – would take on initiatives and seize on opportunities to advance federal policies and develop appropriate programs that touch on the priorities of immigrants and new citizens. Accreditation of foreign-obtained credentials in the professions and trades – an issue that had already been debated in the mid-nineties in the House of Commons – is one compelling issue that continues to cry for more action. While inherently within provincial jurisdiction, the federal government could help further advance the issue by way of a federally funded national apprenticeship or traineeship program in partnership with the provinces.

The two levels of government should go beyond tool-kits on how to navigate the system and move forward on programs that would put bread and butter on the table for the families of new immigrants while the newly arrived breadwinners pursue an apprenticeship or traineeship program for a defined period of time.

Partnership support of educational institutions and provincial regulatory bodies should be further explored to help achieve this objective. Developments in these areas would help enhance our labor force in the professions and trades, optimize utilization of the immigrants’ talents and skills, ensure their equitable remuneration, facilitate their settlement and integration, assist in the removal of inter-provincial trade barriers and allow for greater mobility of human resources – all for the good both of Canada’s economy and social cohesion.

EGC: What about the promise to establish a government-wide appointment process based on merit, any progress?
RDP: Yes, this promise has also been fulfilled. The Independent Advisory Board for Senate Appointments and the Independent Advisory Board for Supreme Court of Canada Judicial Appointments – both constituted this year and widely reported – exemplify the new government-wide appointment process. While the shortlists of names provided are non-binding on the Prime Minister and the new process may not be wholly perfect in achieving its goals, the resulting appointments to date to these two Canadian institutions reflect a more rigorous commitment to merit, integrity, non-partisanship, gender balance and to Canada’s diversity.

Less profiled by the media but no less important, the same merit-based criteria to the selection process now apply to all Governor-in-Council (GIC) appointments to Crown corporations, government agencies, boards, commissions, and quasi-judicial tribunals. These federal institutions easily reach over 1,500 nationwide. Vacancies will be advertised in government websites and other online or print media, and for “ leadership positions (chairs, CEOs, heads of agencies, agents and officers of Parliament, ombudsmen) and all full-time positions”, published in the Canada Gazette.

Indeed, the new Government of Canada has moved quickly to fulfill its particular promise for a more rigorous merit-based approach to government-wide appointments.

“Merit will be assessed through a process that is reflective and appropriate for the organization’s mandate and operating context.”

Moreover, openness and transparency have become the order of the day. The impact of these changes is real and palpably far-reaching.  Our diverse citizenry can sense fair and equal opportunity to render service to their country. Community leaders would do well to be vigilant and play their volunteer advocacy role to spread the news.

EGC: Family reunification has always been close to the hearts of immigrants. Progress on the promise to date?

RDP: IRCC has immediately doubled the number of sponsorship applications allowed for parents and grandparents to 10,000 a year starting 2016 and some 20,000 admissions have been anticipated under the Parent and Grandparent Program. Indeed, the Annual Immigration Plan for 2016 has seen a shift in policy that favors family reunification and has anticipated faster processing times “across multiple immigration programs including those for: spouses; partners and children; and parents and grandparents.” Canada has targeted for 2016 to welcome 300,000 new permanent residents – an increase of 7.4%over the 2015 level – with the economic class total decreased from 181,300 to 160,600 and the family class increased from 68,000 to 80,000.

EGC: I understand next year’s total target is the same as that of this year. What  happens to the economic and the family classes? Would they remain unchanged, too?

That “reuniting families helps immigrants build successful lives in Canada…and improves integration and economic outcomes for the immigrant while contributing to the development of Canada’s social, cultural and economic development.”

EGC: How about the other promises under Reuniting Families?

RDP: With respect to the other three promises under the heading, Reuniting Families, the newly installed IRCC Minister John McCallum reiterated the following commitments in his Annual Report to Parliament on Immigration 2015:

The Government will also seek to provide more opportunities for applicants who have Canadian siblings by giving additional points under the Express Entry system. The maximum age for dependent children will be increased to 22 from 19, allowing more Canadians and permanent residents to bring their children to Canada. The Government will also move towards granting immediate permanent residency to new spouses entering Canada, thereby eliminating the conditional two-year waiting period.

While I have not yet seen, at press time, in the Canada Gazette the specific timelines for the effectivity of the foregoing commitments, I take it as a given that the needed changes to the rules would come sometime this coming year since the government has the majority in Parliament.  Thus, the dominant commitments under Reuniting Families have been fulfilled and I would venture to say the remainders would also have been delivered before the end of 2017.

The anticipated new rule changes do carry certain implications. When last changed in January 2013 to make the cut-off age at 19, dependents under this age apparently made up 90% (64,757) of the total sponsored children, while those this age and over constituted only about 10% (7,237). Restoring the cut-off age to 22 would conceivably add some 7,000 more dependents.  It was suggested in 2013 that the older children could come separately as international students who, of course, would face higher tuition fees than domestic residents. For dependents of live-in caregivers whose eligibility for permanent resident status can take an unduly long time, the detriment to their children by missing the younger age cut-off becomes readily apparent. I share the government view that the promised new rule changes – restoring the cut-off age to 22 and the other two mentioned above - would on balance be ultimately favorable to both the immigrant families and Canada.

Next: Progress made to remainder of specific commitments, and implications (Part 4 and last of the series)