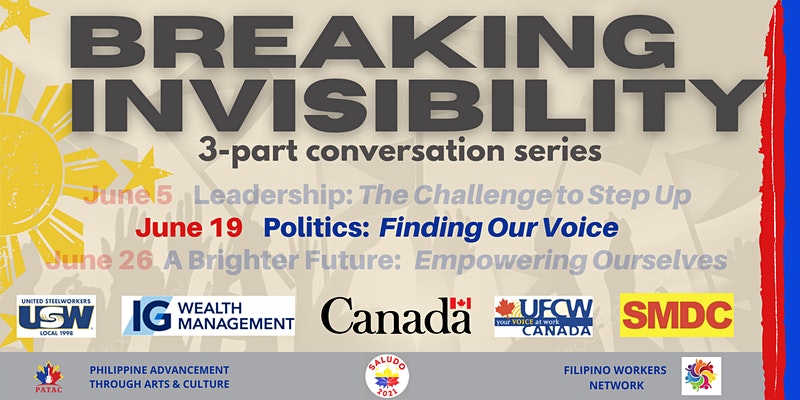 (This is Dr. Pagtakhan’s column, Medisina at Politika in Pilipino Express  for June 1, 2021.)

Note: Filipino Heritage Month inspires pride among Canadian Filipinos – now nearing a million in Canada - and provides them with a dedicated opportunity to share about themselves with fellow Canadians and, thereby, make Canada a better nation. Thus, subsequent topics on this historic month would be further explored in later issues, including 1) the contributions of Filipino Canadians to Canadian society, 2) the richness of Filipino language and culture, 3) the importance of Filipino heritage for future generations, and 4) what celebrants and critics have said about FHM.]

“That, in the opinion of the House, the government should recognize

Filipino Heritage Month, a brainchild of Canadian Filipina Paulina Corpuz, is a story of inspiration and perseverance. As President of the Philippine Advancement Through Arts and Culture (PATAC) –a network advancing issues of concern to people of Filipino origin – Corpuz felt a need to complement traditional celebrations of Philippine festivities to reach the younger generation. Inspired by Black History Month, she conceived of an equivalent one for the Filipino Canadian community. The first opportunity – a UFCW gathering to which she was invited - presented itself in November 2016. She shared her idea with a friend. Soon, three members of the Ontario Legislature from three political parties, acting individually, agreed to bring her proposal as a motion or a bill. Regrettably, all failed.  Ostensibly frustrated, she made contact in October 2017 with a Toronto city councilor who called her back a couple of weeks later. Fifty public endorsements were urgently needed. With help from her husband, Paulina mobilized her network. The City Clerk received in time the endorsements required. In November 2017 – exactly a year after Corpuz’s  brainchild was conceived – the City of Toronto gave its unanimous nod, including the request to the federal government “to declare June as Filipino Heritage Month in 2018, and for future years.”  In January 2018, MP Salma Zahid, on her own, worked on the project. Canada’s House of Commons unanimously passed Zahid’s Motion-155on October 30, 2018. Filipino Heritage Month in Canada saw its birth after nearly a two-year gestation period.

An Even More Meaningful Declaration of Canada FHM

Motion-155 asked the House of Commons to form a collective opinion, not an order, for the Government of Canada to declare June, every year, Filipino Heritage Month. Since it is only an opinion and not an order, the Motion as passed was not binding on the Government. But the unanimity of votes that adopted this Motion not only carried the weight of the House but also affirmed the tacit and robust support of the Government since the Prime Minister and cabinet ministers– who, together, constitute the Executive or the Government in our parliamentary system of democracy – joined in the vote as individual MPs. It was a conscious and voluntary decision on the part of the Canadian government. This makes Canada’s declaration even more meaningful – a firm salute and a sincere acknowledgment and appreciation of Filipino Canadians’ contributions to nation-building; the richness of their language and culture; and the importance of reflecting upon their heritage for future generations.

This more meaningful acknowledgment is reflected eloquently in MP Salma Zahid’s opening statement when the MP led the debate in the House: “I do this on behalf of a vibrant and dynamic Filipino Canadian community that is proud of its culture and heritage and equally proud of its new home, Canada, a community that makes immeasurable contributions to Canadian life from coast to coast to coast.”

Added Winnipeg North MP Kevin Lamoureux (Parliamentary Secretary to the Leader of the Government) with equal eloquence: “I believe (this motion) makes a very powerful statement about Canada's diversity and how important our diversity is to us as a nation…it is one of the greatest strengths we have as a nation. It is one of the reasons we will continue to do well as a country into the future.”  Was he linking his argument to the third part of the motion that speaks to “the importance of reflecting upon Filipino heritage for future generations?” It is my view Lamoureaux had this in mind, too.

Let me emphasize that these supportive statements, including those subsequently expressed during debate, came from all political parties and, therefore, cannot be considered as partisan. And not one statement came from a Filipino Canadian MP since none presently holds a seat in the chamber of the House and, therefore, cannot be construed as self-serving.

Celebrating this year’s Filipino Heritage Month in the midst of the COVID-19 pandemic has challenged, not confined, the ingenuity of organizers wanting to celebrate this nationwide historic month. While observance precludes in-person gatherings in public pursuant to current public health guidance, the eagerness to proceed is as great as the enthusiasm that attended its inauguration and earlier celebrations. At press time, five groups – governmental, parliamentary, and Filipino-Canadian community-based – plan to hold virtual celebrations nationwide, from single-day to month-long: 1) the Philippine Embassy and Consulates General in Canada, 2) the Federal Liberal Caucus under the lead of Minister of Families, Children and Social Development Ahmed Hussen, 3) Filipino Heritage Council of Canada (FHCC), 4) Filipino Canadian National Congress (FCNC), and 5) the Philippine Advancement Through Arts and Culture (PATAC). Below is a list of anticipated events and what they hope to achieve and portray:

Starting June 1st: The Filipino Canadian National Congress, under the leadership of its President, Ms. Narima Dela Cruz of B.C. and 2nd Vice-President and Chair of Arts, Culture and Heritage Committee Genalyn Tan of Manitoba -  “is putting out a video for June 1st1st to kick off the celebration and show its central message: “celebrating Filipino Canadians especially the frontline and healthcare workers, with prominent Filipino Canadians in ‘Barong’ holding the message: "Thank you frontline and healthcare workers."

Starting June 5th: The Philippine Advancement Through Arts and Culture (PATAC), under the leadership of its President, Paulina Corpuz, is presenting a three-part online forum, Filipino Heritage Month - Breaking Invisibility,  designed to uplift the Filipino community’s profile in Canada and be more visible in the Canadian mainstream leadership and political arena,  on June 5 [“Leadership – Step-Up”], June 19 [“Politics – Break the Cycle”]  and June  26 [“A Brighter Future – Move Forward”], between 8:30 pm to 10:00 pm EST. A virtual storytelling event, it will engage an intergenerational group of Filipino leaders across Canada to challenge Filipino-Canadian invisibility and explore creative solutions to such issues.

Starting June 12th: to July 12“Proudly Philippines, Proudly Filipino!”: The Philippine Embassy in Ottawa and the Consulates General in Vancouver, Calgary and Toronto will launch on June 12 their virtual month-long event dubbed “Proudly Philippines, Proudly Filipino!” Said Vancouver’s Consul General Maria Andrelita Austria in a press release: “… we would like to recognize …Filipino-Canadians who make us proud by serving as living examples of the best of the Philippines abroad.” One of them –and examples will be drawn from the fields of politics, media, the arts and business – will be posted daily on the respective websites and social media accounts of the Philippine embassy and consulates general. Not only their success stories will be known but also “what their thoughts are on being a Filipino in Canada.” It is hoped they will “inspire others and lead to increased awareness of the Philippines among second-generation Filipino Canadians and Canadians at-large.”

I note that the Philippine government’s project begins on June 12, Philippine Independence Day. With their proclamation of national independence more than a century and a score ago, the Filipino people have since reflected to the world their commitment to human dignity – a crown jewel of our heritage – to cherish and to share as we observe 2021-Filipino Heritage Month.

June 17th: Parliamentary Participation: The National Liberal caucus – the totality of the Liberal Members of Parliament including, the Prime Minister and his cabinet ministers and their parliamentary secretaries – will hold, under the lead of Minister Ahmed Hussen, an hour-long virtual event by mid June. While details are not known, it appears they will also engage Filipino Canadians to share their pride and to reflect on the significance of Filipino Heritage Month. This type of engagement would positively impact on development of responsive public policy and programs such as in immigration since citizenry engagement creates trust in relationships so much so stakeholders open up more dialogue with the government.

Starting June 27th: Filipino Heritage Council of Canada under the leadership of Chairman Tony San Juan and Cultural Event Chairman Jun Calaguio, Jr., and their team of Board members, Technical Director and Writer will interview a few Canadians of Filipino heritage to discuss their personal backgrounds, professional careers and the challenges they encountered along the way. Ambitious, it will be an hour-long event “aired across Canada on OMNI Television channels in Alberta, British Columbia, Manitoba, the Maritimes, Ontario and Saskatchewan, and will be uploaded also on social media, on June 27 and 29 to mark Canada’s twin occasions: "Canadian Multiculturalism Day" and '"June Filipino Heritage Month."