In celebrating the 124th anniversary of Philippine independence, Prime Minister Justin Trudeau commemorated the start of diplomatic relations between Canada and the Philippines in 1949.

In a statement, Trudeau recognized the long history between the two countries noting, “Canada will continue to work with the Philippines on shared priorities such as deepening trade and driving economic growth, strengthening peace and security globally, and advancing human rights for the benefit of people on both sides of the Pacific.”

Trudeau also acknowledged the growing Canadian Filipino population and their contribution to Canada. “As we mark Filipino Heritage Month throughout June, I encourage all Canadians to recognize the important contributions Filipino communities have made – and continue to make – to our country. As we continue to keep Canadians safe and protected from COVID-19, we recognize the many members of the Filipino community who play essential roles on the frontlines of the pandemic response and continue to work to keep our most vulnerable healthy. Your contributions will not be forgotten.”

Minister of Housing and Diversity and Inclusion Ahmed Hussen also acknowledged Filipinos’ contribution to Canada’s nation-building. In a statement issued on June 1st celebrating Filipino Heritage Month, Hussen praised the Filipino spirit: “Whether it’s in business, politics, health, or the arts, the nearly one million people who claim Filipino heritage in Canada represent one of the fastest-growing diasporas in our country, and their positive impact continues to be seen in towns and cities across Canada.”

Hussen particularly acknowledged the work of Filipino health care workers by noting that Canadian Filipinos are driven by the value of Kabayanihan, or a sense of selflessness, and are “also among the many who continue to work on the frontlines of the COVID-19 pandemic. The ongoing sacrifices made by members of the community embody who we are as a country, and reaffirm our Canadian values of perseverance, selflessness, and hard work.”

Canadian Filipino MLA Mable Elmore for Vancouver-Kensington and Parliamentary Secretary for Anti-Racism Initiatives Rachna Singh issued a joint statement on the month-long celebration. In part, the statement reads, “The pandemic has challenged British Columbians in many ways over the past year, particularly those who work in the child care and health-care sector, caring for the elderly and those who are unwell, while raising and inspiring our younger generations. We are grateful to the many Filipinos working in these sectors for their dedication and selflessness as they have worked on the frontlines to keep fellow British Columbians safe.” 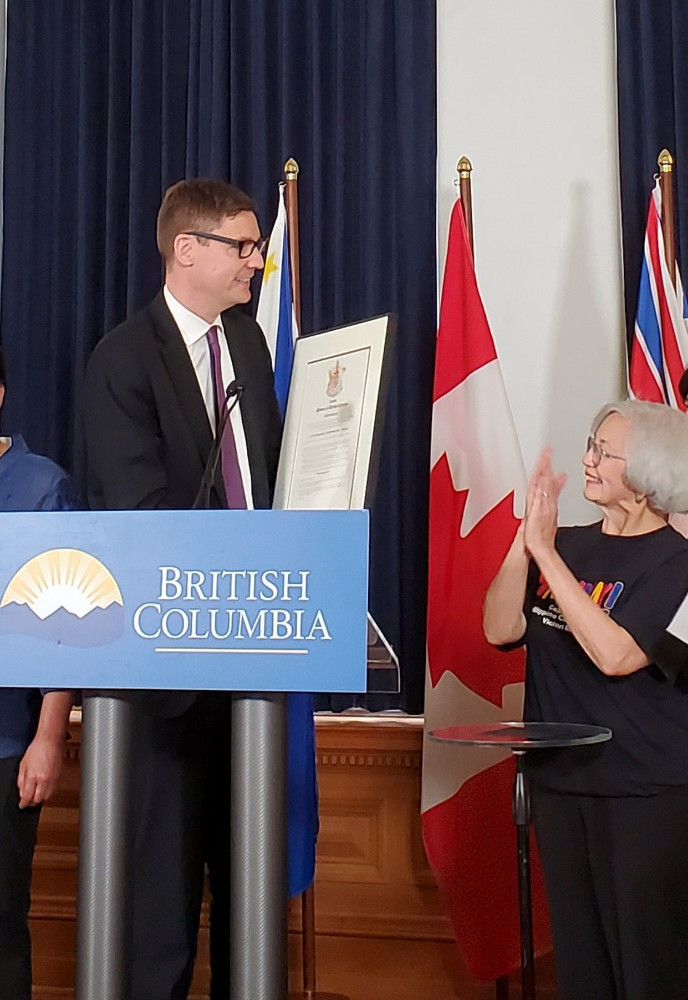 Elmore hosted the Filipino community of British Columbia at a reception on June 1 marking the start of the Filipino Heritage Month. The reception was held at the Hall of Honor of the BC Legislature building in Victoria. Attorney General David Eby and Minister Responsible for Housing presented the Bayanihan Cultural and Housing Society with a framed copy of the related declaration. Consul General Maria Andrelita Austria and over 50 FilipinoCanadians and their guests attended the event.

Member of Parliament Kevin Lamoureux, wearing a Philippine flag-inspired suit jacket, opened his Parliament Hill speech on June 10 with “Mabuhay, magandang hapon sa lahat!” He extolled the “million-strong” Filipinos in Canada: “What you’ll find is a general consensus that the contributions of our Filipino heritage community are second to no other.” He encouraged his fellow MPs to “recognize the important role that our Filipino heritage community does every day of the year.”