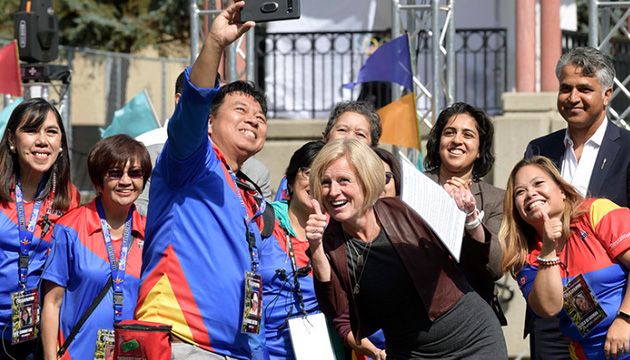 The Province of Alberta will expand learning opportunities for students by developing a Filipino language and culture curriculum, Premier Rachel Notley announced on February 7 in a meeting with Filipino community leaders.

The program is a response to requests from community to improve Filipino language offerings in school. It may expand the availability of Filipino language classes to younger grades and more locations, depending on whether school districts choose to offer the program.

Filipino language and culture curriculum is currently offered as locally developed courses at the high school level in some jurisdictions including the Calgary Catholic School District, Edmonton Catholic Schools and St. Thomas Aquinas Roman Catholic Schools. After the new K-12 Filipino curriculum is developed, Alberta Education officials will work with stakeholders and community partners to identify resources to support the curriculum.

Education Minister David Eggen also said that the ministry will build on those existing courses to develop a curriculum for all grade levels. In a media release, Minister Eggen said, “Strengthening language programs based on local need and demand can be an effective tool in addressing racism. In fact, this is one of the ways we’re acting on the feedback we heard, and commitments we made, in our government’s anti-racism consultations and report.”

The envisioned K-12 Filipino language and culture curriculum will not be mandatory. The Province will allow school authorities to choose the language programming that best meets the needs of the communities they serve.

An estimated 170,000 people of Filipino descent in Alberta are expected to benefit from the new curriculum by connecting children and youth with their heritage and culture.