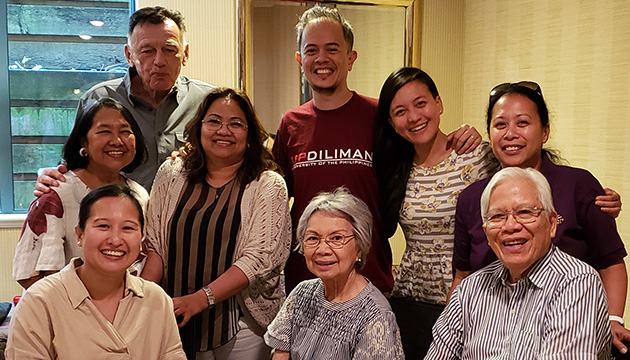 Canadian Filipino Net, or CFNet for short, ended its first year of operation last year on a positive and optimistic note.

It averaged more than a million hits that year and had some cash left in its bank account.

Staff Changes
CFNet’s second year (August 2017 to July 2018) started with a major reorganization of the Editorial Board. Eleanor Guerrero-Campbell resigned in order to focus on her next book. She continues as adviser with no editorial duties. Clay Campbell continues as legal advisor.

Prod Laquian was elected President/CEO to replace EGC but due to Prod’s health issues, he is temporarily spared any duties and editorial functions. The main bulk of editorial functions fell on Eleanor Laquian who agreed to assume the editorship until somebody else was ready to take over that responsibility.

Emmy Buccat agreed to serve on the Editorial Board as director in charge of fundraising and fund development. Kaye Banez volunteered to take charge of the CFNet sponsorship campaign and work closely with Emmy on fundraising.

Mary Anne Mandap resigned when her diplomatic tour of duty in Canada ended and she had to return to the Philippines. She continues as CFNet Philippine correspondent. She was replaced as managing editor by Rachel Ramos-Reid who managed to coordinate staff work effectively from her home in Vancouver Island – strictly by email.

Iona Santos Fresnoza continues to send out CFNet’s twice-a -month teaser /newsletter while Arlene Wright remains the steadfast webmaster who brings CFNet to life without fail every 1st and 16th of each month.

Carissa Duenas of Toronto and Carlo Javier of Vancouver joined CFNet’s list of regular contributors while Jo Flach of Toronto officially became a member of the CFNet team, in charge of lifestyle trends, along with Dr. Adelaida Lacaba- Bago as Phillippine correspondent and Veronica “Vernie” Caparasas as correspondent for Alberta. To know more about the new CFNet family, please click on the following link: https://canadianfilipino.net/about-us/team.

Money matters
This year a Sponsorship campaign headed by Kaye Banez with support from Emmy for fundraising was launched. They started the ball rolling with two sponsorships.

Community outreach
In October, CFNet lost a marvelous friend and avid supporter when Mel Tobias passed away. The entire CFNet family participated in a memorial service celebrating his life, attended by the Filipino community in Vancouver and emceed by CFNet’s Eleanor Guerrero Campbell.

In collaboration with CFNet, Dahong Pilipino, the only Philippine business and community directory in Canada based in Vancouver, agreed to publish the CFNet teaser/newsletter on Dahon’s online edition every 1st and16th of the month to alert the Filipino community in BC about new articles in the CFNet forthcoming issues.

Subscription Numbers
Compared to last year, CFNet’s list of subscribers (readers and social media followers) increased this year from 123 to 177 in addition to media and public institutions which remained unchanged. CFNet now has 797 Facebook friends and 217 Twitter followers. Its total unique visitor averaged 6,000 per month.

Viewing Statistics
For the 12-month period starting with August 2017 and ending in July 2018, the website had 1.5 million hits originating from 25 countries - from way down South in Australia to up North in The United Kingdom and countries in between like: France, Germany, Italy, Israel, Netherlands, Poland, Russian Federation, Sweden and Switzerland; in the Middle East like Qatar, Saudi Arabia and United Arab Emirates and of course, in Asia - the Philippines, China, India, Japan, Hong Kong and Singapore. But the most hits came from Canada and the United States.

Articles and Editorials
Twelve themes were chosen for this second year and each theme was highlighted in each of the monthly editorials. Total published materials for the year were: 12 editorials, 24 teaser/ newletters and 105 original articles written by staff, contributors and correspondents exclusively for CFNet. Of the 105 articles, 35 were on Arts, Culture and Food, 30 on individual personalities, 25 were news items, 7 were commentaries and a few fillers. Some of these articles were reprinted in other publications with CFNet’s permission.

Conclusion
Although this year started with major changes in its Editorial Board, CFNet ended with a firm resolve to continue for another year its mission to inform, engage and connect Filipinos all over Canada by writing about matters that affect their daily lives and present the Filipino community to Canadians in general in a positive light that makes them proud to be Filipinos