Details
By Jaime A. FlorCruz 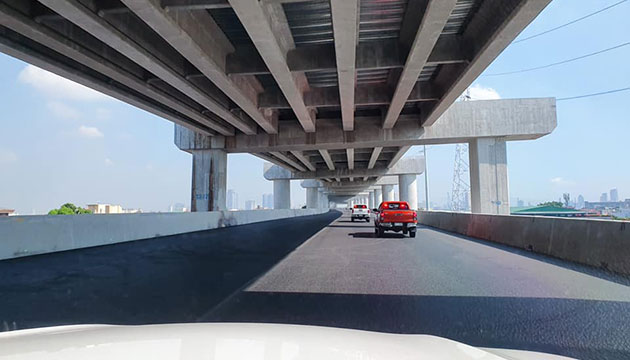 July 1, 2021 - Frequent motorists in the Philippines will remember that it takes one to two hours to drive from Makati to Balintawak in Quezon City.

Thanks to the newly opened Skyway 3,it now takes only 20 minutes to do that.

The Skyway 3 is an 18.83-km long elevated highway built and operated by the San Miguel Corporation.  It was designed to decongest traffic in EDSA. It was formally opened in January 2021 to the delight of local motorists, who may now avoid taking the traffic-clogged EDSA highway if they are willing to pay the toll charges.

It is the latest phase of The Skyway, a 29-km stretch of elevated expressway that connects North Luzon Expressway (NLEX) and the South Luzon Expressway (SLEX). “It’s wonderful that I can now drive from my Alabang home to the New Clark City in less than two hours,” remarks a member of the American Chamber of Commerce in Manila. “It’s a smooth drive and travel time is predictable too.”

Some commuters find personal satisfaction. “Aside from cutting travel time, the experience of driving through Skyway 3, from a passenger’s perspective, is quite unique,” says Cristine Ramirez. “You see the same city scape from a different vantage point. Now you take notice of the buildings and landmarks in a new angle. You can even challenge yourself to identify landmarks you’re used to seeing on ground level. It’s interesting.”

Writer-historian Perfecto Martin remembers taking two hours to travel from his residence in Paranaque to his hometown in Bulakan, Bulacan. “Now it’s down to one hour, thanks to Skyway 3. I’m thankful we had this Skyway in our lifetime. Saves me time, no traffic stress, less taxing physically. It’s easier for me to visit my hometown, anytime.”

This writer has driven on Skyway 3 several times, commuting from my condo apartment in Makati to my hometown in Malolos, Bulacan. It now only takes me 20 minutes from the time I get on the Buendia ramp to the entrance of the NLEX in Balintawak, and another 30-40 minutes to get into Malolos. It used to take me an hour and a half to two, even three hours, due to unpredictable traffic congestions on EDSA, especially when it rains.

Three bridges are being built across Pasig River. One of them was recently opened linking the Ortigas community in Pasig with the booming hub of Bonifacio Global City (BGC). The bridge has cut the commute between the two areas by 20-30 minutes.

These new structures are a boon not just for motorists and commuters. They benefit farmers and traders and entrepreneurs who can now move their produce and products to their markets promptly and efficiently.

The Duterte administration has prioritized infrastructure flagship projects in the belief that they will stimulate economic growth and will help bridge the rich-poor gap. They create jobs. Better roads and internet services, for instance, would help farmers bring their produce-- mangos, bananas and coconuts--to the markets and raise the growers’ income.

The Skyway is just one of the many flagship infrastructure projects that have been completed or underway. They are among the 119 projects worth 4.73 trillion pesos the current administration had lined up as part of its Build, Build, Build blueprint.

Of those, says Vivencio Dizon, presidential adviser for infrastructure projects, 11 projects have been completed and 51 more are expected to be finished beyond Duterte’s term. Still, Dizon’s team hopes to finish 29 flagship projects worth 238 billion pesos before President Rodrigo Duterte completes his term in 2022.

One of the biggest infrastructure projects underway is the North-South Commuter Railway System.  The three-phase Clark-Calamba Railway will be a 148 km (92 mile) urban rail transit line, which when completed in 2025 will run from New Clark City in Capas, Tarlac to Calamba, Laguna. The NSCR’s PNR North Phase 1, which is funded with official development assistance (ODA) from Japan, will link Metro Manila atTutuban Station with Malolos, Bulacan. Its target completion is 2022. Phase 2 will link it all the way to the New Clark City.

Other notable projects in other regions include the new airports in Cebu, Zamboanga, Bicol and Dumaguete.

Credit goes to “public-private partnerships (PPP)”, which pool together government and private sector resources in financing, technical and management. Credit also goes to the increased government’s Build, Build, Build program which seeks to address major bottlenecks, focusing on transport, water resources and energy. Public infrastructure investment has risen from an average of 3% of GDP during 2011-16 to over 5% in 2018.

Current infrastructure budget is now equivalent to 4.6% of the national gross domestic product. ”Nowhere in our history did we exceed 5% of gross domestic product,” said Economic Planning Secretary Karl Kendrick Chua in a recent television briefing. “Ten years ago, that was our aspired goal. We could not even reach more than 2% of GDP.” Chua says the government has lined up 1 trillion pesos for infrastructure projects in the past three years, excluding 2020 because of the pandemic. “We have a strong pipeline to ensure that the next administration will have a very good starting point to build on the progress we have made so far,” Chua said.

Government financing has been augmented by preferential loans from lending institutions like the World Bank, Asian Development Bank and the Asian Infrastructure Investment Bank.

The World Bank, for instance, recently approved a $280-million loan for infrastructure projects in the rural areas. The bank expects more than 300,000 Filipinos to benefit from the projects.

Duterte’s Build, Build, Build blueprint is not without detractors. Critics say the expensive railway, subway and flood control projects are not as important compared to more hospitals and medical facilities now badly needed to resuscitate the battered public health system. They say these projects should make way for financial assistance to households and workers who are coping with the economic and financial shocks inflicted by the pandemic.

Government officials are not tone deaf. Dizon says some projects had been cancelled due to the fiscal shortage caused by the coronavirus pandemic. “We really have to be more prudent about how we finance and what we finance,” Dizon said in a television interview, noting that many of the funds had been channeled to finance the government’s pandemic response.