Details
By Tony A. San Juan 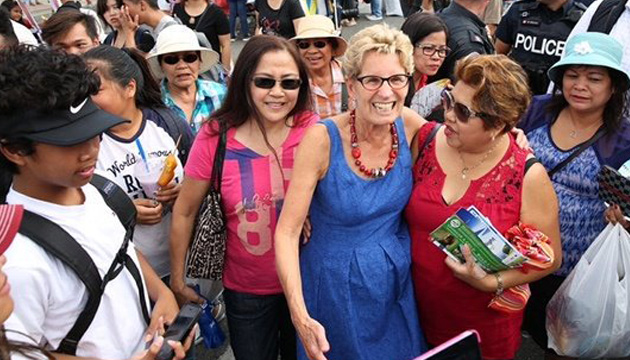 The year 2016 has come and gone. It's that time of the year again to review and reflect on the top news and events in a given month that have significant impact on Filipino Canadians, especially in Ontario’s Greater Toronto Area (GTA).

Here are what I consider to be the big news stories over the 12-month period, summarized in compendious, chronological order as follows:

February: Conrad Santos, the first Filipino Canadian elected to a provincial legislature in 1981 as a Member of the Legislative Assembly (MLA) in Manitoba, died on February 29.

March: The Liberal government of Prime Minister Justin Trudeau announced on March 8 that Canada will welcome between 280,000 and 305,000 new permanent residents in 2017, with emphasis on family reunification. The Ontario Liberal Government declared that it will grant free tuition starting in school year 2017-2018 to more than 150,000 eligible, low -and-middle-income students whose parents earn $83,000 or less. Former Toronto Mayor Rob Ford passed away on March 22. Filipino Canadian academics and writers participated at the National Metropolis Conference, the largest yearly gathering of immigration researchers, policy makers and community advocates in Canada, held in Toronto.

May: The Canadian Multicultural Council-Asians in Ontario (CMC-AO) honoured Dr. Francis Rementilla with the 2016 Outstanding Asian-Canadian award, and Cristina Carpio as CMC-AO’s ‘poster hero’ on May 1. The Filipino Canadian Parents Association in Catholic Education (FCPACE) conducted its second annual conference of Catholic parents and teachers on enhanced parent engagement and involvement on May 14 at the Catholic Education Centre in Toronto. Rosalinda Tijam on May 14 was reelected president of the Philippine Press Club of Ontario (PPCO). More than 250 students from the Toronto Catholic District School Board (TCDSB) attended the York University-Centre for Asian Research lectures on ‘Filipino Voices in the Arts and Academia’. TCDSB's annual Proudly Pinoy Day-Asian Heritage Week was held on May 28 at the St. Maria Goretti Catholic School.

July: The Philippine Independence Day Council Mabuhay Cup Invitational Tournament in basketball was conducted on July 23. So did other big community-based basketball leagues. The Kalayaan Centre held its Fiesta Ng Kalayaan on July 30-31 in Mississauga.

September: His Eminence Luis Antonio Cardinal Tagle, Archbishop of Manila and the seventh Filipino Cardinal, celebrated masses in the Greater Toronto Area on September 2 and September 4. The Philippine Independence Day Council’s Mabuhay Festival, Fashion Show and Parade was held on September 3 and September 4 at the Nathan Phillips Square, with 2013 Miss International Bea Rose Santiago and Toronto Mayor John Tory in attendance. On September 10, the Fiesta Filipina Dance Troupe of Canada commemorated its 50 years of existence.

October: Ontario's minimum hourly wage rose from $11.25 to $ 11.40 on October 1. Philippine Secretary of Agriculture Emmanuel Pinol and two other officials of the administration of Philippine President Rodrigo Roa Duterte attended a Toronto town hall meeting with Filipino Canadians on October 29.

December: Immigration Minister John McCallum on December 7 vowed to cut processing times for spousal applications from the average of 26 months to within 12-18 months, and with an expanded annual quota for 2017. On December 10, Angely M. Pacis, a Filipino Canadian lawyer, won the nomination as the Conservative candidate for Member of the Provincial Parliament (MPP) in Mississauga Centre. Atty. Antonio M. Villarin announced his candidacy for MPP Nomination in Scarborough Centre.

Have a great, blessed, and bountiful 2017 throughout!

Tony A. San Juan is an educator, community advocate, and political commentator based in Toronto.