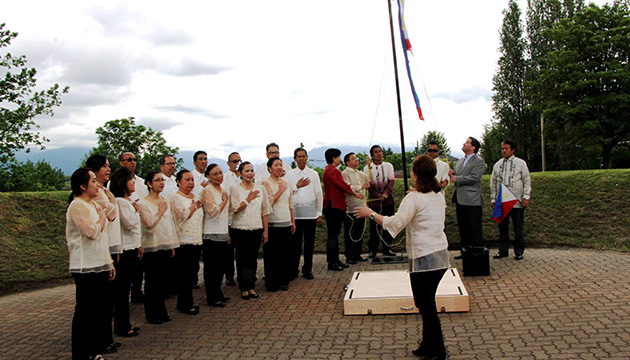 The Canadian Filipino community in Canada commemorated the 119th anniversary of the declaration of Philippine Independence with a series of festivities across the nation.

Philippine Ambassador to Canada Petronila P. Garcia highlighted the significance of having flag-raising ceremonies in Canada, which is home to more than 700,000 Filipinos. She underscored the robust friendship and the vibrant Philippine-Canada relations manifested in the areas of political, economic, socio-cultural relations and people-to-people exchanges.

In Ottawa, the month-long festivities started on June 11, with the annual Independence Day picnic organized by the Philippine Independence Day Committee of the Ottawa Valley (PICOV) at the Vincent Massey Park in Ottawa.

Members of the Filipino community in Ottawa brought traditional Filipino food at Vincent Massey Park and shared the fun and excitement of the much-awaited “Parada ng mga Lechon,” cultural performances and sports activities.

Ottawa Mayor Jim Watson presented a plaque to PICOV Chairperson Nora Arriola, which officially declared June 10 to 18, as Philippines Heritage Week in the City of Ottawa.

On June 12, Filipino Canadians gathered at the Ottawa City Hall parade ground as the Philippine flag was hoisted in a simple ceremony celebrating Philippine Independence.

Representing the Mayor of the City of Ottawa, His Worship Jim Watson, Deputy Mayor Mark Taylor, together with Members of the Canadian Parliament Peter Fonseca, Larry Maguire and Gary Anandasangree, welcomed Philippine Embassy officials and members of the Filipino Community in Ottawa.

In British Columbia, the kick-off event was the flag-raising ceremony on June 3, at the Filipino Plaza in Vancouver.

The ceremony, spearheaded by the United Canadian Associations of British Columbia (UFCABC), was attended by some 50 leaders and members of Canadian Filipino community organizations and Canadian officials, including representatives from the Vancouver Police Department.

During the brief program that followed, Member of Parliament Don Davis, newly re-elected Filipino-Canadian Member of the Legislative Assembly (MLA) Mable Elmore, and Consul Anthony Mandap of the Philippine Consulate General in Vancouver delivered remarks paying tribute to the Filipinos’ heroic struggle in 1898 to win freedom from Spanish colonial rule.

Expounding on this year’s Independence Day theme, “Pagbabagong Sama-samang Balikatin,” Consul Mandap called attention to the sweeping changes happening in different parts of the world and called for the community’s collective support for the constructive reforms being pursued by the government of the Philippines.