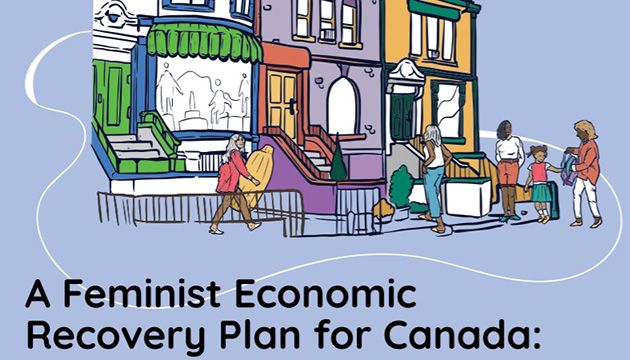 August 16, 2020 - A new report supports longstanding calls to grant permanent residence status to immigrant caregivers upon their arrival in Canada.

Caregivers mostly come from the Philippines with temporary work permits.

The endorsement is among the recommendations in the report titled 'A Feminist Economic Recovery Plan for Canada: Making the Economy Work for Everyone'.

The proposals were made in the context of fashioning an economic recovery program from the COVID-19 pandemic, which will be inclusive in nature.

“Migrant workers such as those who provide vital work in agriculture or care sectors often do not have permanent residency and thus do not have access to government benefits or to healthcare,” according to the paper released on July 28.

As well, “They simultaneously face unsafe conditions such as crowded housing, wage theft, insufficient food, and a lack of health information.”

The report was co-authored by Professor Sarah Caplan, director of the Institute of Gender and the Economy at Toronto’s Rotman School of Management, and Maya Roy, CEO of YWCA Canada.

The document made several recommendations that were grouped under eight broad categories.

The third category is labeled ‘Care Work is Essential Work’.

One of the recommendations under this heading reads: “Consult organizations that support migrant worker caregivers in decision-making for pandemic recovery, and create an expedited path to permanent resident status for immigrant care workers so that they can access healthcare and worker protections on arrival.”

The recommendation continued: “Provide personal protective equipment to migrant workers, conduct rigorous inspections on their working conditions, and ensure they have access to income supports.”

The report made several references to immigrants as among the vulnerable groups in the country.

It also noted the work being done by immigrants, many of whom are women.

“A broader range of people across Canada are now seeing the importance of feminized and racialized labour for our health and well-being—where women, especially women of colour and recent immigrants, are leading the response to a major health crisis and preventing further economic and social fallout,” the report stated.

The paper also noted that the ongoing COVID-19 pandemic has “revealed the necessity of migrant workers to the care economy and to the economy more broadly”.

However, “these workers have largely been excluded from the pandemic response”.

“Many migrant care workers face extreme vulnerability during this crisis, without access to healthcare or emergency benefits,” the report pointed out.

Canadian Filipino Net, the online publication of the Vancouver-based Maple Bamboo Network Society, is one of the organizations calling for immediate landed status for Filipino and other immigrant caregivers.

In a March 16, 2020 editorial, Canadian Filipino Net lamented the “second-class treatment by Immigration and Citizenship Canada of foreign domestic workers and caregivers, nearly all of whom are women of color from developing countries, and more than 90 percent from the Philippines”.

Because caregivers do not have landed status upon arrival, this means that they are separated from their families.

Due to the precarious nature of their temporary status, a number of them face exploitative working conditions or abuse.

In November 2018, a broad coalition of groups in Canada released a report titled ‘Care Worker Voices for Landed Status and Fairness’.

The groups include Vancouver’s Committee for Domestic Workers and Caregivers Rights.

“A caregiver program that forces women from the global South to leave their families behind in order to show care for Canadian families is a cruel one,” the report declared.

For details of 'A Feminist Economic Recovery Plan for Canada: Making the Economy Work for Everyone',  here is the full document: