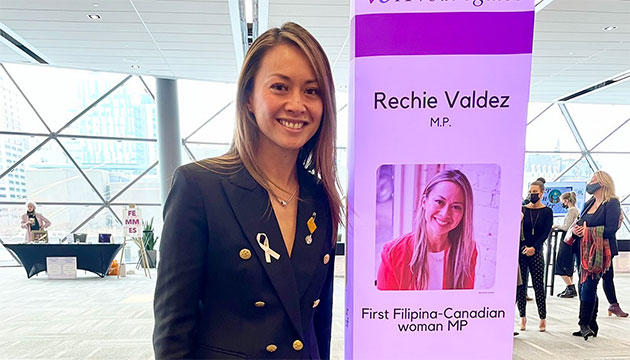 (Editor' Note: at the end of each year, CFNet reviews all the articles it has published and selects for its yearend review articles that were the most read, most liked or had the most impact.)

In the lead up to the federal elections held in September, a number of Canadian Filipinos ran for Members of Parliament. In the end, it was Rechie Valdez representing Mississauga/Streetsville in Ontario who broke the 17-year drought since Dr. Rey Pagtakhan retired from politics in 2004. Valdez is the first Filipina to have been elected to the Canada’s House of Commons.

At the provincial government level, Yvonne Clarke also made history when she was elected in April as member of the legislative assembly or MLA for the constituency of Porter Creek Centre in Yukon. She is the first Canadian Filipino to win a seat in the Yukon Legislative Assembly.

At the municipal government level, Stephanie Valenzuela became the first Canadian Filipino to earn a seat in Montreal city council. A daughter of Filipino immigrants, she won in the district of Darlington in the borough of Côte-des-Neiges-Notre-Dame-de-Grâce.

The Canadian judicial system likewise welcomed a couple of Canadian Filipinos into its ranks. Lawyer Gail Gatchalian was appointed as Justice with the Supreme Court of Nova Scotia while Philippine-born lawyer (the first Philippine-born judge in Alberta) Bernette Ho was appointed to the Court of Appeal of Alberta, the highest court in the province.

All of the above-noted appointments and elections count among the many firsts in Canadian Filipino history.

Not to be missed in 2021 are the heroic actions of many Canadian Filipinos who went above and beyond their civic and professional duties.

Caregiver Jillian Mendoza made headlines across Canada when she saved two boys in her care from an out-of-control car in Toronto.

While stuck in the Philippines during the country’s pandemic lockdowns, Metro Vancouver police officer Clint Hervias made what was supposed to be a brief visit to attend to family matters turn into a community-wide effort to support those badly hit by joblessness in a small town in Antique province.

In British Columbia, ReFood led by DanisonBuan diverts “not-so-pretty” but viable food away from landfills and into the homes of those that need healthy meals, partnering with businesses and local charities.

The delayed 2020 Olympics Summer Games held in the summer of 2021 found Canadian Filipino Kayla Sanchez swam the leadoff leg for Canada’s four-member freestyle relay team that earned the country's first Olympic medal at the time of reporting. Sanchez also won a bronze medal as part of the Canadian team that finished third in the women’s 4×100-metre medley relay.

And finally, towards the end of 2021, Canadian Filipino Net featured a 4-part series on what could potentially be a historic discovery about the first Filipinos in Canada. Contributor Joseph Lopez, on one of his many travels, discovered census documents showing proof that the first Filipino, Benson Flores, who set foot on Canadian soil arrived as early as 1861 in BC based on the 1911 Census of Canada.